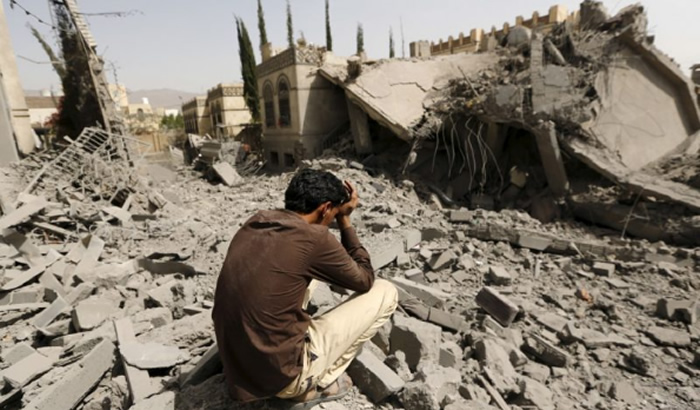 Tory MEPs today voted against a resolution calling on EU countries to “refrain from selling arms and any military equipment to Saudi Arabia”.

“At least ten thousand civilians have died since 2015. Two million people have been displaced. Eight million people are reliant on relief agencies for food. The incidence of cholera is rising. The country is on the verge of famine.

“Death. Disease. Displacement. The Yemen war has raged for year after year after year, affecting millions, yet the Tories today, in opposing an arms embargo on Saudi Arabia, have voted to prolong the suffering.

“Truly the Tories are the party of the few. The arms dealer. The mercenary. The dictator. And so long as their pals continue to line their pockets, they remain indifferent to the hell of the many.”

“All sides are to blame for the atrocities that the Yemeni people are suffering. Saudi air strikes against civilian targets, Houthi recruitment of child soldiers and ballistic missile attacks on Saudi territory, as well as allegations of torture and extra-judicial killings in UAE-controlled jails, make this a horrific situation.

“Peace talks in Geneva collapsed before even starting, because not all the warring parties sat at the table. Resolution 2216 called for the Houthis to surrender as a precondition for the negotiations - this has caused a political deadlock and has not helped the cause of Yemen in any sense. However, the UK government - which bears the responsibility for this act - has so far refused to table a new resolution.

“A new UN initiative would show the serious commitment of the international community, support peace mediation efforts and give a glimpse of hope to the Yemeni population.”

“What we are witnessing in Yemen is a humanitarian crisis, possibly a war crime, yet the Tory government continues to sell arms to Saudi Arabia even when it has been proven that those weapons are being used to murder innocent children in Yemen.

“By voting against an arms embargo on Saudi Arabia, the Tories are continuing to ignore the evidence of Saudi atrocities and turning a blind eye to the devastation being wrought upon millions of civilians, who will continue to suffer.”