Labour MEP: "We refuse to be enemies... we will not let those that seek to divide us win" 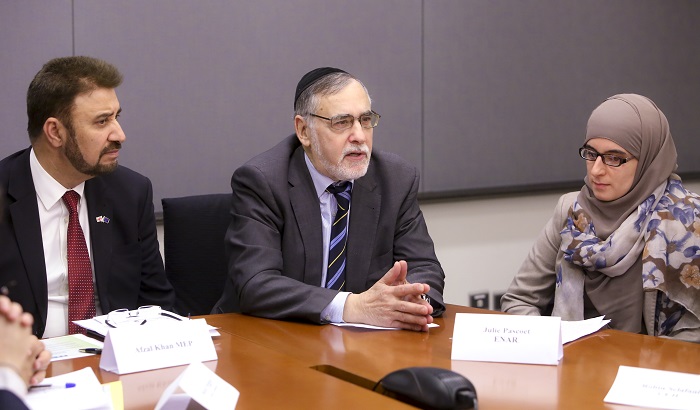 I was pleased to welcome a group of Jewish and Muslim activists in the European Parliament yesterday, and host them to mark the end of the global campaign #WeRefuseToBeEnemies, writes Afzal Khan MEP.

We came together to challenge rising Islamophobia and anti-Semitism in Europe. We do this because action is urgent. We have witnessed a rise in attacks and harassment on Jewish and Muslim people, as well as their property. New life is being given to some old and ugly demons.

In France, synagogues are regularly attacked, and kosher supermarkets smashed and looted. In Germany, PEGIDA’s hate-filled rallies against Muslims now routinely number more than 40,000 people. And at home, in England, our cosmopolitan London has become a place where Muslims are routinely victims of hate crimes. Just recently, an elderly man was physically abused and assaulted on a bus.

Yesterday's event was also about saying thank you to all those involved in initiatives to counter this growing problem. Yesterday evening the Foundation for Ethnic Understanding (FFEU), the European Network Against Racism (ENAR), Coexist Brussels and Jewish Contribution to an Inclusive Europe (CEJI) sent a clear message - we will not let those that seek to divide us win.

The message of Albert Guigui, the Chief Rabbi of Brussels, was that to achieve peace we have to learn to build together, and for one another. In his view, togetherness can take us forward, whatever the hardships and darkness surrounding us.

The presence of David Friggieri, the European Commission's first coordinator on anti-Muslim hatred was particularly important. Mr Friggieri said he was moved by our common aim, and promised that in the future our work will be wholeheartedly supported by the Commission.

I was deeply impressed with a group of young Jews and Muslims from Belgium, who travelled jointly to Israel-Palestine. Their stories, and in particular lessons learned about coexistence in Europe having visited a place of deep divisions abroad, shook me. The European Union should invest more substantially in exchange programmes that would foster a greater understanding between ethnic and religious groups in Europe.

The driving force of my whole adult life has been forging ties between communities. In Manchester, I helped launch the Jewish-Muslim and Christian-Muslim Forum, bringing together communities from across the city in a safe space. This programme has now become a beacon initiative replicated across the whole country.

We can and we must turn the tide on all forms of extremism. Such ideology claims that someone like me, a proud Brit, a faithful Muslim, or individuals like the ones I hosted in the Parliament yesterday, cannot be good Jews and good Muslims, and still be loyal Europeans.

I wish to end my remarks by expressing my best wishes to Jewish people across the world, wishing them a happy and peaceful Hanukah. The central message of Hanukah is that it is possible to bring light and hope to all those who live in a world of darkness and despair.

So my hope is that yesterday´s gathering with its warmth and brightness will inspire us all to strive for a compassionate and tolerant society.

Afzal Khan MEP is a member of the European Parliament foreign affaris committee and vice-chair of the security and defence committee.