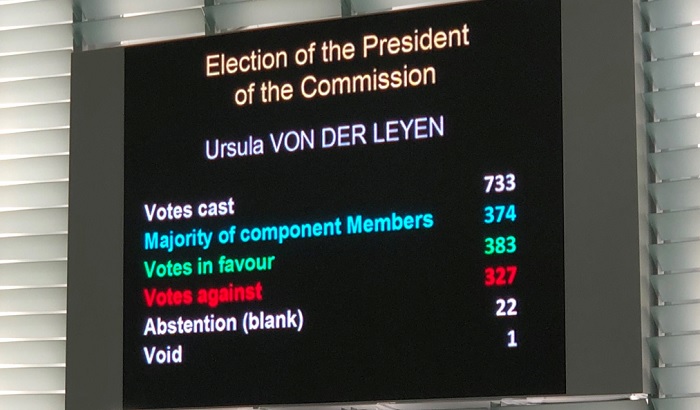 Along with our Socialists and Democrats Group colleagues in the European Parliament, it was only reluctantly and subject to significant conditions that Labour MEPs agreed to support Ursula von der Leyen as President of the European Commission, as proposed by the 28 European Union Heads of State and Government.

Labour MEPs demand substantially more ambition from her on climate action and energy policy, equality, fair taxation, rule of law, engagement with social partners and civil society. She must now firm up these stated commitments and deliver.

Commission president-elect Ursula von der Leyen must now put forward a comprehensive programme that will deliver on the pledges she has made and set a course for a more progressive Europe if she is to retain the support of Labour MEPs in the votes on the Commission as a whole in October.

“Today we approved Ursula von der Leyen’s candidature for president of the European Commission, however the support of Labour MEPs is not unqualified. We have reservations about whether she is the best person to deliver the radical, reforming agenda Europe needs, but over the past few weeks, in meetings and correspondence with us and our socialist colleagues, she has shown a willingness to engage with us on the biggest issues, including Brexit.

“Any Commission president will have to work with all sides of the house, and our priority must be to ensure that the goals of the Socialists and Democrats are at the heart of any programme.

“People want their political leaders to get on and deliver, and rather than risking the European Union being plunged into months of uncertainty we have done just that, but our support is not unconditional.

“On the biggest issues, like action to tackle the climate emergency, greater gender equality, a minimum wage for all European workers, fair taxation so digital tech giants don’t continue to get away with tax avoidance, and upholding the rule of law and defending our fundamental EU values and human rights, not only will we hold her to the promises she made, but will push for more action. If she fails to deliver, and fails to listen, we will revise our support.

“Today’s vote is not the end of the process, and if Ms von der Leyen does not put forward the kind of programme she promised, one that addresses our priorities, with a gender-balanced team of commissioners able to deliver it, we will withdraw our support in the final ratification vote in October.”