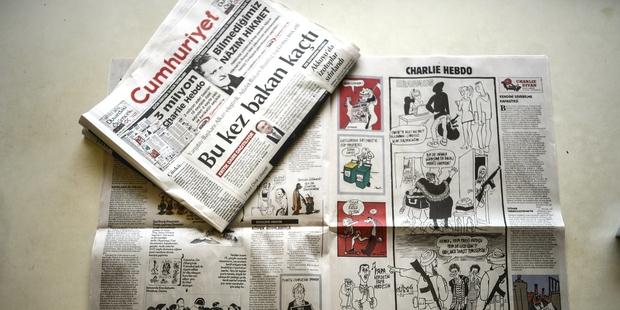 As millions mourn the shooting of journalists in France, the European Parliament convening this week in Strasbourg today extended the fight for freedom of expression to legal threats, harassment and character assassination against free journalism in Turkey, writes Richard Howitt MEP.

Indeed last weekend’s scenes reminded me of the hundreds of thousands who went on to the streets after the Turkish writer Hrant Dink was shot in 2007 and my deep regret that, despite the work of a foundation established by his widow, the situation in Turkey appears to have got worse not better in the intervening years.

A resolution voted for by MEPs was provoked by dawn police raids on newspapers and television stations in December that led to the arrest of 31 people, mainly journalists, on charges of terrorism – which carry some of the gravest sentences under the Turkish penal code.

Nevertheless reports suggest no evidence was presented of actual criminal intent against those arrested, with the crackdown fitting a pattern of legal harassment, smears and threats against those who provide political opposition to the government or who critically report on corruption allegations against it.

Our resolution also condemns the recent arrest of a Dutch journalist, demonstrating how foreign journalists are not exempt from attack.

Correspondents of The Economist, Der Spiegel and the New York Times in Turkey have all been threatened, with one CNN correspondent forced to flee the country after being accused of espionage.

Previous attempts to ban social media are also being revived in the country this week, in an apparent attempt to suppress reports Turkey’s intelligence organisation may have been implicated in the supply of arms to ISIS fighters in Syria.

As someone who is proud to call himself a friend of Turkey, and a keen proponent for the country’s accession to the EU, it is with a heavy heart I sign up to such criticisms.

However in negotiations I had to argue against opponents of the country seeking to use this latest incident to introduce wording that would have imposed immediate financial penalties against Turkey or put up new barriers in the membership negotiations.

I did so because politicians as well as journalists must not allow ourselves to be trapped in to self-censorship. On these arrests, it was our duty to speak out.

I am saddened explanations that the release of all but four of the journalists given to me and to my fellow MEPs by the Turkish representative in Strasbourg this week seemed wantonly to ignore the climate of fear and self-censorship which remains inflicted on the country’s press as a result.

It is the blatant denials that undermine trust and confidence with those of us who want to support reform efforts in the country, and which one very senior EU official told me had led to “desperation” in the telephone calls between Brussels and Ankara which followed the arrests.

Meanwhile, former prime minister Recep Tayyip Erdoğan, now elected as the country’s president, reacted characteristically by telling a news conference: “Nowhere in Europe or in other countries is there a media that is as free as the press in Turkey.”

The sober truth is that Turkey ranks 154 out of 180 in press freedom according to the Reporters Without Borders index last year.

The annual survey by the Committee to Protect Journalists, published only last month, showed Turkey amongst the top ten countries in the world for imprisoning journalists, ranking alongside Azerbaijan, Iran and China.

However, Erdogan’s protestations must be put in to a context where he also rebuffed European criticisms of the arrests saying the EU should “mind its own business”, and last week when he was prepared to partly attribute the Charlie Hebdo terrorist attack to “Western hypocrisy”.

Today’s European Parliament vote ascribes that hypocrisy instead to the government in Ankara.

I wonder whether the Turkish press will fairly report even this?

Richard Howitt MEP is foreign affairs spokesperson for both the Labour Party and the Socialist and Democrat Group in the European Parliament and is a member of its joint parliamentary committee with the Turkish Parliament.

This blog originally appeared on Index on Censorship.