On security, as on everything, May's Road To Brexit is a road to the cliff edge 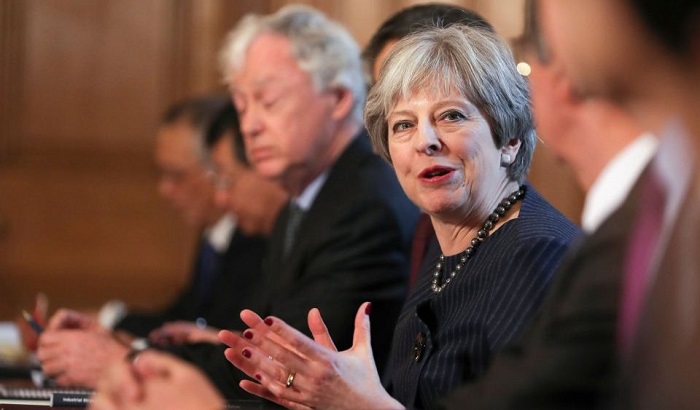 Unless the government’s ‘Road to Brexit’ series of speeches, which began this week, offers concrete solutions to the reality of the Brexit it’s pursuing, the UK will carry on careering towards the cliff-edge, writes Richard Corbett MEP, Labour’s Leader in the European Parliament.

Following Boris Johnson’s typically gaffe-prone, detail-light, question-ignoring embarrassment of a speech that claimed, without a hint of irony, that this Tory Brexit that is being foist upon us is a ‘liberal’ project, Theresa May is set to give a speech tomorrow claiming Hard Brexit Britain will continue to cooperate with the EU on defence and security. And, just as with the foreign secretary, the prime minister’s ‘unifying’ rhetoric looks likely to contain no specifics, fail to address any concerns, and unravel faster than the stage at her conference speech.

Just as with aviation, on which we’re still nowhere near getting a deal – airlines are even inserting ‘Brexit clauses’ into their post-March 2019 tickets in case of a no deal Brexit – on security, there is no fallback WTO-style option, meaning it is even more crucial that the closest level of cooperation is maintained. Yet the Tory direction of travel up to this point, and the EU response to Theresa May continually caving in to the Brexit hardliners, makes this ever less likely, whatever May might pretend tomorrow.

Only two-and-a-half months ago, European Union chief Brexit negotiator Michel Barnier warned the UK that in leaving the EU law enforcement and defence agencies, Britain loses all decision-making powers in EU foreign and defence policy and will be unable to take command of EU-led operations. In the event of a Hard Brexit, the UK will also no longer have a seat on Europe’s political and security committee, a high-level gathering of ambassadors, and the British defence secretary will no longer take part in EU defence minister meetings.

Could we at least continue to participate some way in Europol, which plays a crucial role in targeting cross-border crime and combatting terrorism? If not, the UK will lose access to law enforcement databases, such as the Schengen Information System, which is critical for fighting organised crime and terrorism and for checking people at our borders. At present, the director of Europol, Rob Wainwright, and the EU security commissioner, Julian King, are both British, but leaving the EU means going from leaders in this field to, at best, background participants - following without a say.

Exiting the European Defence Agency, meanwhile, will mean that we will lose another top table seat where decisions are made.

Theresa May might have avoided this by pushing for a Brexit deal that would enable us to remain part of these vital agencies, but instead, by pandering to the hardliners in the Tory Party, she is driving Britain over the cliff towards a bleak and dangerous future.

The proposed measures also aim to deprive terrorists of the means to carry out attacks by making it harder to obtain the materials for home-made explosives, providing technical support for law enforcement and judicial authorities in criminal investigations, and new measures to tackle terrorist financing. And the EU is also set to further strengthen its external action on counter-terrorism, enhancing Europol’s cooperation with third countries, and looking to open negotiations for counter-terror agreements with Algeria, Egypt, Israel, Jordan, Lebanon, Morocco, Tunisia and Turkey.

Will Theresa May give any indication tomorrow as to whether the government intends to keep any of those new and existing measures under its Brexit plans? Does it intend to continue to contribute money and resources to maintain our common security? How will it manage current and future threats? We can no longer rely on the US for security – how can the prime minister guarantee the security of British citizens if there is no guarantee of a deal? The defence secretary this week said Russia was to blame for the 2017 cyber-attack, but how will the government protect British citizens if we lose access to joint EU databases, cooperation and resources?

It’s unlikely the prime minister will adequately address any of these concerns, if she mentions them at all, as she is hamstrung by the government’s Brextremists who push for a distant relationship with Europe in field after field. Even if May were to suddenly announce that, in this field, she wants strong cooperation, the response from our European partners will no doubt be coloured by what they have heard so far about other fields in which the government wants to distance Britain from them.

The reality of the ‘Road to Brexit’ that the government is taking us on, is that it is a road to the cliff edge. Departure from Europol and the European Defence Agency will be the inevitable result of a Tory Hard Brexit, a Brexit that would diminish our safety and security at home and influence abroad, one that risks seeing us sink into isolation and irrelevance, on the outside of the tent shouting in.

As Boris, his hostage May, and the rest of the Brextremists will learn, Panglossian optimism alone is not enough to turn the reality of diminished security into enhanced safety, less prosperity into more prosperity, job losses into more jobs, less trade into more trade, WTO water into tariff-free wine. The Road to Damascus contained fewer miracles than this Tory Road to Hard Brexit is turning out to need.