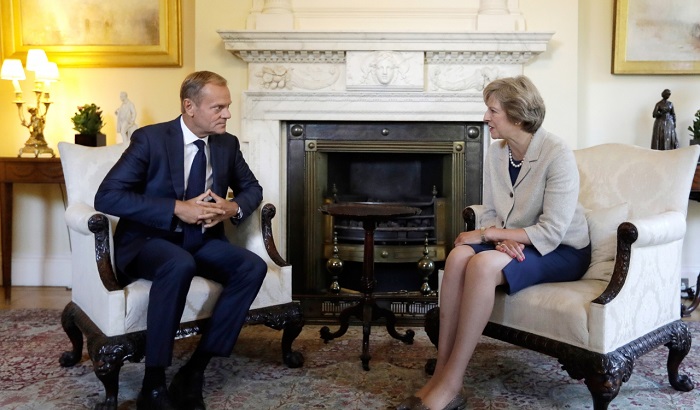 Labour MEPs have warned that Theresa May must urgently build bridges with her fellow EU leaders, and listen less to the hardline ‘no deal’ Brexiters, after European Council President Donald Tusk told the European Parliament today that Europe will not be “intimidated” by threats, and that failure to reach a deal would hurt Britain more than the EU.

“The signs are there, from Chancellor Merkel, President Hollande, and now Donald Tusk: threats and intimidation from the UK government are building hostility amongst our European partners and are making it harder to build the alliances we need to get a good deal.

“The prime minister lacks allies and ideas, seemingly alone and isolated in the EU, apparently more comfortable in the presence of Donald Trump than Donald Tusk. If this attitude persists, we risk crashing out of the European Union with either a dire deal or no deal at all.

“Theresa May needs to stop being led down the path favoured by Nigel Farage and the ‘no deal’ masochists on her front and back benches, and start building her relationships with her fellow EU leaders and negotiating partners. If she doesn’t, we will end up with a truly disastrous WTO Brexit, with high tariffs, job losses and economic chaos.”

1. Here is Donald Tusk’s speech to MEPs this morning: http://www.consilium.europa.eu/en/press/press-releases/2017/03/15-tusk-report-european-parliament/

These are the remarks on Brexit:

“Brexit was not on our agenda last week, but let me share two remarks, given that this is our last meeting before the UK triggers article 50.

“I will do everything in my power to make sure that the EU and the UK will be close friends in the future. Britain will be dearly missed as an EU Member State. At the same time, I would like to stress again that the EU's door will always remain open for our British friends.

“When it comes to negotiations, we will have no choice but to start the withdrawal talks once the UK notifies. We are carefully preparing for these negotiations, in close consultation with Member States and the European Parliament. It is our wish to make this process constructive, and conducted in an orderly manner. However, the claims, increasingly taking the form of threats, that no agreement will be good for the UK, and bad for the EU, need to be addressed. I want to be clear that a 'no deal scenario' would be bad for everyone, but above all for the UK, because it would leave a number of issues unresolved. We will not be intimidated by threats, and I can assure you they simply will not work. Our goal is to have a smooth divorce and a good framework for the future. And it is good to know that Prime Minister Theresa May shares this view.”