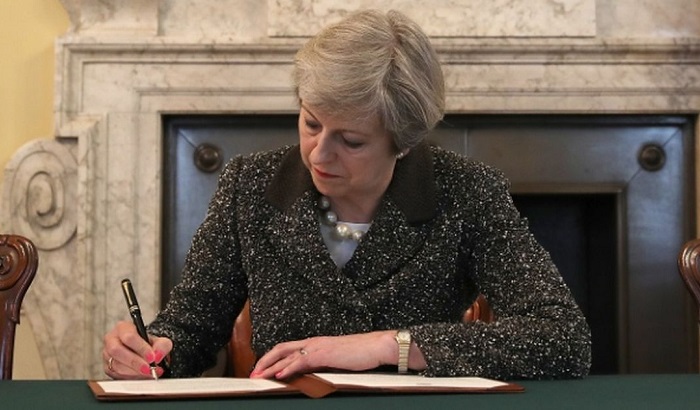 Today, Theresa May will trigger Article 50, the formal process for Britain to exit the EU, but the recent actions of the government, and attitude of ministers, means the EU will go into the Brexit negotiations united while the UK will be divided, writes Glenis Willmott MEP, Labour’s Leader in the European Parliament.

In two years’ time, it is likely Britain will have left the European Union, but what kind of new relationship will we have with the rest of the EU? And how should the government go about achieving the best deal? Increasingly, the government is risking the hardest of exits, crashing out on WTO terms with no deal – a real danger as a result of ministerial intransigence and the antagonising of our EU partners.

If the negotiations don't start well, it will be much harder for them to finish well.

Take the issue of citizens’ rights, Labour’s call to guarantee the rights of three million EU citizens currently resident in the UK: an uncontentious idea, with wide support, yet something the government has refused to do. To have done so would not only have been the right thing to do, but would almost certainly have been reciprocated by other EU countries, giving peace of mind to British citizens living in the EU as well. So now millions living in our country, plus more than a million Brits abroad, are facing uncertainty, finding themselves caught up in the negotiations.

The votes on this issue in parliament did not go unnoticed in Europe’s corridors of power. The EU-27 begin the negotiations united in their concerns about how Theresa May's government will approach the talks. And so we start off on the wrong foot, and should be in no doubt that the government's intransigence on this will have hardened resolve on the other side of the table.

Or look at what’s happening in Scotland, where incompetent and insensitive handling of Brexit by the Tories has allowed Nicola Sturgeon to make a play for another independence referendum. Debate in the last few weeks has reinforced the impression among our EU partners that when the prime minister speaks to them about Brexit, she does not do so on behalf of everyone in the United Kingdom. Ministers have no mandate for their preference of an ever harder Brexit, and in pursuing it they are not only threatening the future of the UK, but are even weakening their own hand in the negotiations.

Meanwhile, one of the more striking aspects of Europe’s response to the Brexit vote has been the capacity of EU leaders to maintain a united line in public and in private. It is clear that they have no desire to see their countries follow Britain through the exit door.

It also looks like the anti-EU tide may be turning amongst Europe’s electorates too. In the Dutch general elections the far-right Geert Wilders performed well below expectations. The French elections look difficult for mainstream politicians, but the staunchly pro-EU Emmanuel Macron leads the Front National's Marine Le Pen 63%:37% in polling for the Presidential run-off. In Germany the two candidates most likely to emerge as chancellor are the strongly pro-European Angela Merkel and Martin Schulz, the former president of the European Parliament, whose arrival on the domestic political scene has revived hopes for Labour's sister party the SPD.

They might not agree on everything, but with regard to the Brexit negotiations, all this means the EU-27 looks set to continue to speak with a single, united and increasingly confident voice, and, as European Council President Donald Tusk recently warned, unwilling to take kindly to threats. Attempts thus far by ministers to pick countries off and try and sow division have fallen flat and succeeded only in souring relations that we'll need during the talks.

On top of which the EU will not want to get exclusively bogged down with the UK negotiations. Getting the least damaging Brexit deal is important to them, but won’t be the only show in town – terrorism, migration, and the eurozone and banking crises will all be vying with Brexit for the attention of EU leaders.

In addition, discussions have begun on the next steps for the EU. There is talk of building a more rights-oriented, fairer, less corporate “social Europe”. That was one of the main topics under discussion by EU leaders at the weekend’s Rome summit to commemorate the 60th anniversary of the founding of the European Coal and Steel Community, the forerunner of the European Union. It would be one of the infinite ironies of Brexit if we leave just as EU-27 citizens begin to benefit from stronger social rights, action that could deal with some of the concerns at the root of the Brexit referendum.

As Keir Starmer, our shadow Brexit secretary, made clear yesterday, Labour will only support a deal that actually works for Britain and benefits working people. The deal the government negotiates must protect jobs and the economy, and we must maintain a strong collaborative relationship with the EU, with continued cooperation in fields such as security, science, research, culture and technology.

We will continue to hold ministers and leave campaigners to account as they seek to dampen down expectations and claim the new lows are what they’ve wanted all along. As the negotiations start, we’ve already gone from promises of £350 million extra per week for the NHS and membership of the Single Market to no extra money and WTO tariffs in just nine months – how much more will we lose in the next 24? The definition of a “hard” Brexit is being shifted by the Tory right to get tougher over time, and now means something completely different from the morning of June 24th, and utterly unrecognisable from the Vote Leave campaign pledges all the way up to June 23rd.

Mixed messages from ministers; incompetence at the highest level; fears for the future of the UK; Brextremists like Farage, Cash and Redwood appearing to set the agenda; ministers claiming no deal is better than a ‘bad’ deal, when they’ve not even examined in detail the consequences of such a scenario... the government is taking Britain into these negotiations divided, with nothing to demonstrate they have the competence necessary to succeed. Meanwhile our European partners, defying many people’s expectations, are showing a united front. Britain deserves better than this government.