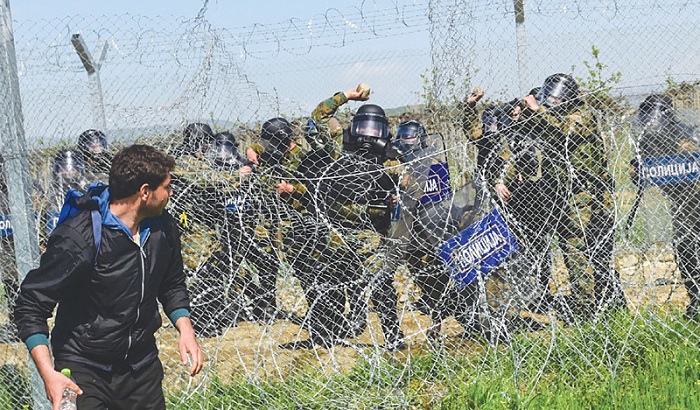 The clashes between Macedonian authorities and migrants highlight the urgent need for an organised and compassionate EU response to the refugee crisis, Labour MEPs have warned.

Migrants have been tear-gassed and fired on by rubber bullets by Macedonian police at the Greece-Macedonia border, as thousands seek to head north in the wake of the implementation of the EU-Turkey deal, whereby Ankara receives financial aid and political concessions in return for taking back all migrants travelling to Greece, and for every Syrian refugee sent back, another Syrian will be resettled in the EU directly from camps in Turkey.

Labour MEPs have also voted for a report on the situation in the Mediterranean that calls for the EU to show solidarity with countries on the periphery such as Greece and Italy by offering humanitarian assistance, quickly implementing the relocation agreement and working together to enhance safer and legal routes to Europe.

"The scenes in the last few days in Idomeni draw attention to the urgent need for a compassionate and organised response. The use of teargas and rubber bullets against refugees and asylum-seekers is unacceptable and goes against all of our European values.

"Over a week has passed since returns under the EU's new deal with Turkey began and already a number of concerns previously raised by this house have emerged with regards to resources and observing international law and human rights.

"Just last week the Commission told us that, at present, only 30 caseworkers, sent from EU countries, have been trained to carry out individual assessments - yet more than 50,000 refugees and migrants are stranded in Greece.

"It is essential national governments urgently provide Greece with much needed humanitarian support without delay to ensure its asylum conditions are significantly improved to carry out returns in full respect of international law."

"Labour MEPs welcome EU cooperation with Turkey in response to the refugee crisis, however agreements with third countries should not be prioritised as the solution to managing migration flows to the EU.

"We call on governments to urgently show solidarity and uphold their responsibilities by quickly implementing key measures in response to the crisis such as the emergency relocation measure - which is taking place at an alarmingly slow rate - and quickly uphold resettlement commitments in the EU-Turkey deal.

"As spring approaches and the risk of people embarking on dangerous journeys across the Mediterranean and Aegean increases, the European Parliament stands ready to advance in its work on upcoming key legislative Commission proposals to enhance safer and legal routes to Europe."

"The vote on today's report will not agree or endorse the EU's refugee deal with Turkey in any way, but is for a resolution which continues to ask the searching questions, which is the proper role of the European Parliament - to scrutinise the deal itself.

"It is right for Europe to seek to cooperate with Turkey and all countries neighbouring Syria in the humanitarian cause of the refugees themselves, but clearly only if this encompasses full respect for international humanitarian law.

"The debate and agreement of the annual progress report on Turkey on the same day the deal itself is being considered by parliament shows that concern about human rights exists both for refugees but also in relation to Turkey more generally.

"The European Union can never trade away respect for human rights for cooperation on migration."