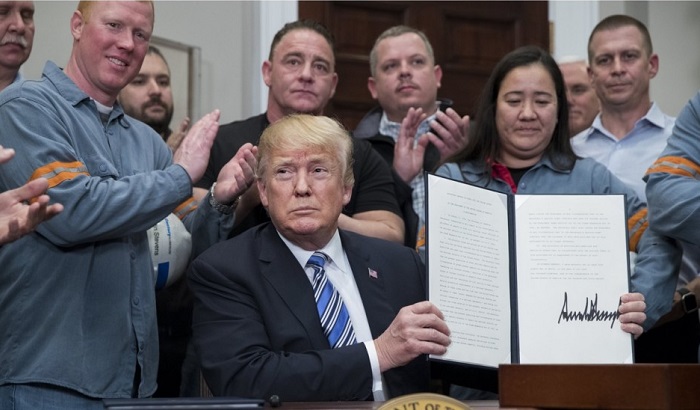 Britain must work with the European Union to resolve the US tariffs row, a row which once more highlights the EU, and not Brexiters’ favourite Donald Trump, remains the UK’s closest ally, Labour MEPs warned as EU trade commissioner Cecilia Malmström updated the European Parliament today on what action the EU plans to take.

Malmström said the EU “are ready to act in a firm, resolute and proportionate way according to WTO rules”, and that the EU “don’t want things to escalate” and “don’t want trade wars”, stressing the need to "protect our citizens and jobs”.

The trade commissioner outlined three main measures, one within the WTO, another in concert with trade partners like Brazil who would be most affected by US tariffs, and immediate safeguarding measures to protect EU jobs.

“It is vital the UK works with the EU to avert a disastrous trade war and protect our steel and aluminium industries, on which thousands of jobs depend. We need an EU-wide exemption from these tariffs, or better still a complete reversal of the current US government’s ‘America First’ policy of economic nationalism and protectionism, that will prove ruinous for the US economy and detrimental to the whole world.

“This row about tariffs highlights once again just how credulous were the Brexiters’ claims that the UK would be better off outside the EU and at the mercy of tinpot autocrats like Donald Trump and Vladimir Putin - while the US attempts to put up tariffs and trade barriers, and the Russian state murders with impunity on the streets of Britain, it is the EU that stands shoulder-to-shoulder with us and remains our closest ally.”

“There is little as sweetly ironic as hearing arch-Atlanticist and international trade secretary Liam Fox forced to admit that we must work with our European neighbours to defend 30,000 UK steelworkers from Trump’s flagrant protectionism. But therein lies the truth - when George W Bush introduced protectionist measures in 2002 which hit high quality UK steel, it was only through a united front with the rest of the EU that we got those tariffs lifted. Today is no different: we are far stronger together than alone in an increasingly protectionist world market.

“Together within the EU we must work far more assertively to address overcapacity in metal production and unfair competition on the one hand, and build alliances with other governments to reinforce and strengthen the multilateral rules for a fairer globalisation and World Trade Organization to counter Trump’s attempt to dismantle global governance and provoke damaging trade wars. We must learn from our history as economic wars have too often preceded violent conflict: which is why the EU was created in the first place.”