Labour MEPs: Russia must respect human rights and re-engage with the world 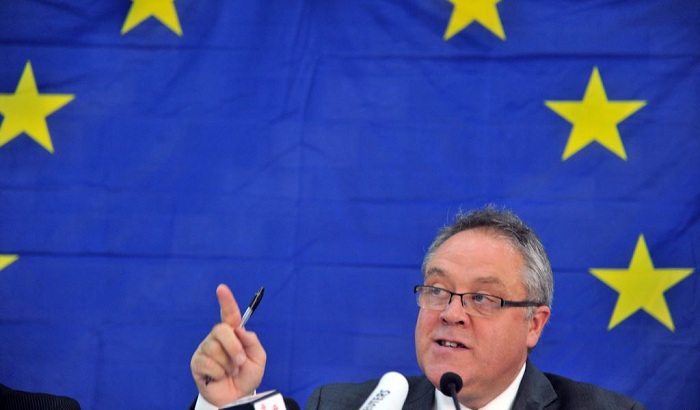 Labour MEPs voted today for the EU to maintain its tough stance on Russia, and called on Moscow to respect human rights and international values, to step back from isolation and re-engage with the rest of the world.

MEPs backed a report calling on the EU to continue to use sanctions against the Russian government and exert pressure on President Putin, while keeping channels open, recognising the positive role Russia can play, for example in securing a nuclear deal with Iran and ending the violence in Syria.

In the report, Labour MEPs helped secure important amendments on LGBI rights - calling out the government for failing to address anti-LGBT violence and anti- LGBT legislation - and support for civil organisations in Russia.

"Today's vote, coupled with the stance taken by world leaders at the G7 this week, sends a powerful message to Mr Putin to step back from isolation and re-engage.

"It is right that Russia is excluded from the G7 meeting because its politicians and people must understand that if you break international law, you cannot expect to contribute to international law-making.

"Russia's blacklisting of 89 EU politicians, including serving MEPs and UK MPs, is deeply worrying; the aggression in Ukraine shows no signs of abating; the new law on 'undesirable organisations' is a further attempt to restrict freedom of civil society; human rights abuses go on and on and on.

"For these reasons and more we back the continuing use of sanctions, but there must also be engagement - politicians need to be able to travel and meet together because the only way such disagreements can ever be resolved is through dialogue and negotiation."

"Russia is an important neighbour of the EU, and we have clear shared interests in practical cooperation and tackling global challenges, such as countering terrorism, the Syrian conflict, Iran´s nuclear programme and wider non-proliferation.

"I have just come back from Iran where the Russian offer on nuclear enrichment could be a key part in securing a nuclear deal, but where the Russian export of missiles to Iran equally threatens a very different future.

"In Syria too, we want Russia to engage and not to block international dialogue which recognises the overriding need to end violence and to hold to account those responsible for that violence.

"If Russia does not want to be seen as a military aggressor and as anti-democratic, it must not simply line itself with others who clearly are.

"If Russia wants to be treated with respect and as a partner - and I reiterate again we would like to return to a situation where this is our relationship - then Russia could make a strong step towards it by genuinely engaging with us and other international partners on Iran, Syria and in other international conflicts to demonstrate that cooperation is possible and interests are indeed shared.

"We have to find ways of engaging in legitimate public diplomacy without engaging in a propaganda war."