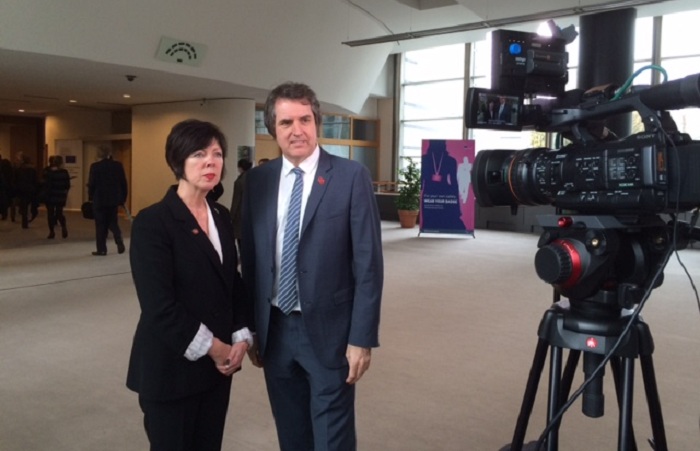 As part of Road Safety Week, Labour MEP for the North West, Theresa Griffin, today hosted two meetings to discuss tyre safety in the European Parliament along with key MEPs and representatives from the European Commission.

In a series of meetings, members of the Parliament's transport committee and the Commission came together with Labour MP Steve Rotheram and the European Transport Safety Council to discuss what further action can be taken in the campaign to improve road safety across the UK and EU.

“I am very pleased that a Member of Parliament has been able to join us in these valuable meetings which I hope will be the start of a European push for improved standards in tyre safety.

“Currently there is no mention of the lifespan of tyres in European legislation and I believe that this is something that needs to change.

“I am calling on the Commission to publish a study on tyre safety and to look at the issues of aged and second-hand tyres and to set up a working group on best practices around the EU.

“With our busy road networks, tyre safety across different member states, especially for vehicles that cross borders, is a crucial issue that we need to get right in order to prevent further tragedies from occurring on our roads.

“This is an area where the European Parliament could really make a difference to people's lives.”

The meetings follow the introduction of a bill, in Westminster, to toughen up tyre laws after three people were killed in a coach crash caused by the blowout of a 19-year-old tyre.

Michael Molloy, 18, from Woolton, Kerry Ogden, 23, from Maghull, and driver Colin Daulby, 63, from Warrington, died when their coach crashed on the A3 in Hindhead, Surrey, as they travelled back to Merseyside from Bestival, in the Isle of Wight, in September 2012. Michael’s mum Frances has been campaigning for laws preventing the use of old tyres.

The bill, introduced by Mr Rotheram, would make it an offence to operate a public service vehicle with tyres that are 10 or more years old. It will next be heard on 28th November 2014. It is supported by Louise Ellman MP, who is the chair of the House of Commons transport committee.

It would also give the UK traffic commissioner power of sanction and enforcement and make it a requirement of the Annual Vehicle Test that the age of tyres be checked and recorded.

“The EU has committed to halving the number of deaths on our roads by 2020. We've taken action to increase road safety education, improve vehicle inspections and protect vulnerable road users but we know that traffic accidents continue to claim far too many lives.

“This is a key issue for the European Parliament transport committee so I'm delighted Steve Rotheram MP is visiting Brussels and helping Britain make a meaningful contribution to European road safety policy.

“This week our new EU transport commissioner, Violeta Bulc, pledged to make road safety one of her top priorities over the next five years, and as Labour's European lead on transport I am determined to ensure Ms Bulc's pledge is upheld.

“With Labour pushing for decisive action in Westminster and Brussels, we hope to further reduce the number of accidents and make Europe's roads safer for all.”