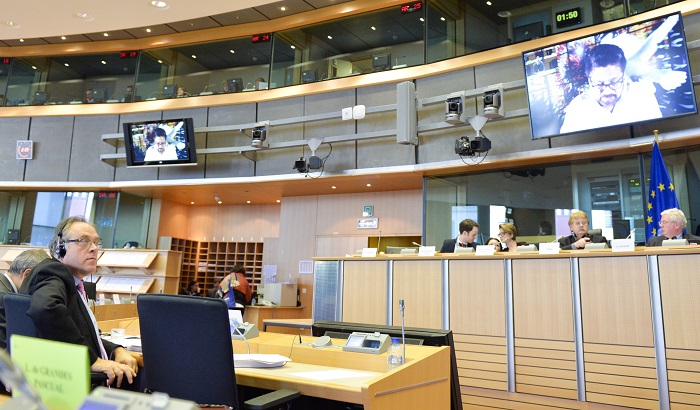 Labour's Richard Howitt MEP has organised a public hearing between the Colombian government and guerrillas in the world's longest-running conflict, which took place today at a historic meeting of the European Parliament foreign affairs committee.

Peace talks taking place in neutral territory in Cuba between Bogota and FARC rebels are at a very sensitive point, with a deadline to be completed by March. Mr Howitt personally went to advise the talks in Havana as part of a delegation of the British trade union campaign 'Justice for Colombia', of which he is Vice-President.

The public hearing is due to hear from both government and guerrilla negotiators, which will be the first time they have appeared together internationally - the peace talks have taken place behind closed doors. The EU Special Envoy to the peace talks, Eamon Gilmore TD, chaired the hearing.

"In the week after the European Parliament demonstrated unprecedented unanimity in its vote to support the Colombian peace process, this hearing proposed by my own Group but with similar cross-party support here in Brussels, is intended to demonstrate the same high level of support and encouragement directly to both sides and to the Colombian people, to demonstrate to them international support in favour of peace.

"This is the first time that negotiators have appeared together on a panel to address the European public, and we thank them for agreeing to do so.

"Last year I had the privilege of personally being present at the peace talks in Havana, as part of a delegation convened by the NGO 'Justice for Colombia' advising on lessons from the Northern Ireland peace process.

"I came away believing an end to the world's longest-lasting civil war can and will happen, and that Europe has a duty to do everything possible to support peace for the Colombian people, and to be present to support and safeguard the future final agreement which we hope will be made. Today is a follow-up to that visit. I hope it will broaden that belief both here in Europe and in Colombia itself."

"Today's historic hearing shows once again the vital role the EU plays in bringing peace - not just in Europe but throughout the world. Nearly a quarter of a million people have died in Colombia's 50-year conflict; today the government and the guerrillas are rightly saying enough is enough, and we are determined for Europe to play its own role to help secure an end to the world's longest-running civil war."