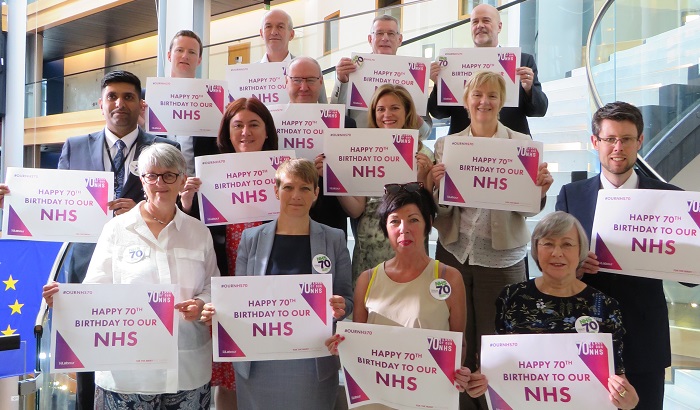 Under a Tory Brexit, we risk continued uncertainty for the 144,000 EU nationals working in health and social care, reduced access to medicines, treatment and research, and the privatisation of parts of the NHS as the price of trade deals, Labour MEPs reiterated today on the eve of the NHS’s seventieth birthday.

“Under a Tory Brexit, we face a triple-whammy of fewer EU workers at a time of a recruitment crisis, access to medicines under threat if we put up barriers with the EU, and Donald Trump getting his grubby hands on our NHS in a tawdry Tory trade deal.

“Throw in the billions in extra taxes working people will have to pay in lieu of the fantasy ‘Brexit dividend’ and this is clearly not what people voted for. This is not what Leave campaigners promised during the referendum, and wasn’t on the side of any buses.

“The BMA last week said Brexit poses a ‘major threat’ to the NHS and the nation’s health. On Sunday, the head of the NHS said they were preparing for disruption to medical supplies in the event of no deal. The threat of trade barriers means pharmaceutical companies are leaving. The relocation of the EMA means a loss of jobs, investment and research.

“Labour MEPs will not let patients suffer through a bad Brexit deal. In its 70th year our NHS faces many challenges: make no mistake about it, a bad deal or a hard, Tory Brexit would cause untold pain to our health service.”

“Britain’s NHS is the envy of the world, our crowning achievement, founded on our principles, our values - Labour values. Free at the point of delivery for all, regardless of wealth or background, a service truly for the many, and not the few.

In its 70th year, the NHS faces its biggest threat: Brexit. Labour MEPs are calling for: