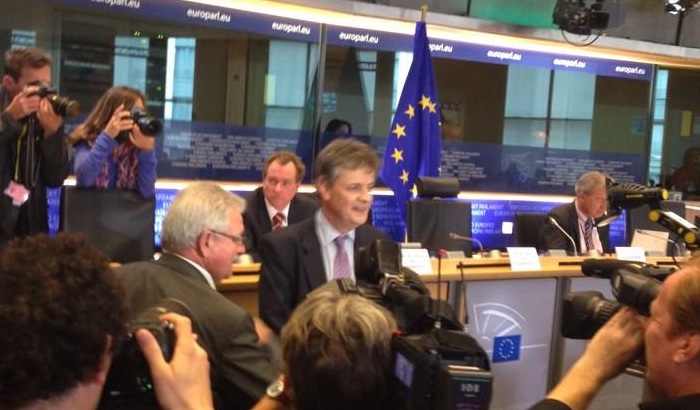 Labour's MEPs on the European Parliament economic and monetary affairs committee (ECON) have urged David Cameron to learn the lessons of Lord Hill's difficult hearing process after being endorsed by the committee tonight.

Following yesterday's recall hearing, the commissioner-designate for financial stability, financial services and Capital Markets Union won 45-13 to be a commissioner in today's ECON vote, and 42-16 in the vote for that portfolio.

"David Cameron has comprehensively alienated all his potential European allies. While it was right that Lord Hill was required to attend an additional hearing to answer further questions about his portfolio, his progress was made much harder by the UK government's confused approach to Europe.

"Lord Hill made clear efforts to establish himself as a pragmatic, pro-European candidate to be the new commissioner for financial services. But because this was so at odds with the increasingly hostile, anti-European stance taken by his party back home, it's no surprise that some MEPs were sceptical about his sincerity.

"We needed to hear from Lord Hill a second time to ensure he had covered all the detail of his critically important portfolio, but he still faced a much harder time than necessary because of the way the Conservatives have alienated potential allies here in Brussels. The UK very nearly lost its first choice commissioner as a result.

"Now that he's been confirmed, let's hope Lord Hill stays true to his own words, and not those of his increasingly out-of-touch party back in Westminster."

"It was Labour MEPs who came to the rescue of Lord Hill, and avoided the ultimate humiliation for the UK of having our commission nominee sent back.

"The Conservative Party needs to learn the lessons of Lord Hill's recall - you can't protect the country's interest by having an isolationist approach. The fact the Conservative Party is on the fringes of Europe, led by a man who has few allies, undoubtedly caused him problems.

"The recall was a result of the Tories' brand toxicity that led to the humiliating experience for Lord Hill. This is more to do with the fact the Conservative Party is on the fringes of Europe, than the man himself.

"Lord Hill will succeed only if he demonstrates his independence from the British government. He needs to be a pragmatic voice in the debate on Europe and deliver the best outcome for the people of the UK.

"The UK has become increasingly marginalised over the past five years and this is entirely down to David Cameron's retreat from the centre and switching his support from the EPP to the ECR to appease his party.

"As for Nigel Farage, he showed yet again that a vote for UKIP is a wasted vote - their MEPs didn't even bother to turn up to vote for a fellow Brit."