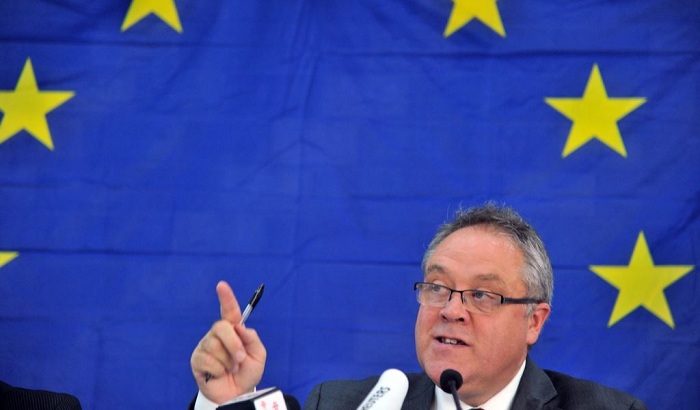 The EU tonight confirmed that an independent investigator is being brought in following claims European officials were implicated in serious corruption in Kosovo - while on a mission designed to promote the rule of law.

Labour's European spokesperson on foreign affairs, Richard Howitt MEP, had called for an independent inquiry into allegations a senior official colluded with suspects in criminal cases; that another official took bribes to shut down prosecutions; and that a third one quashed internal investigations by EULEX, the EU rule of law mission in Kosovo. It is also alleged journalists have been threatened by EULEX officials.

The British whistleblower who exposed the scandal has been suspended from her job.

Richard Howitt MEP, who led the questioning on behalf of the Socialists and Democrats Group of MEPs in the European Parliament, said:

"We have a zero tolerance policy towards corruption and the European Parliament is sending a message that any possible corrupt and criminal activity in this case must be dealt with severely.

"If allegations of corruption come forward, they have to be dealt with fully, fairly and satisfactorily and, as we stand today, I can't say hand on heart that I believe that that has yet been done. EULEX has done a lot and we want it to do more not less, but their and Europe's credibility is at stake.

"The test of the EU is not simply in what has happened if any corrupt act has taken place, but it is in how the allegations are dealt with, whether they're properly investigated, whether those responsible - if evidence comes forward - are then prosecuted and held to account?"

Mr Howitt also questioned the apparent failure to apply whistleblower protection procedures in relation to the British official involved, who is on secondment from the Crown Prosecution Service (CPS).

"I'm also concerned that rules for the protection of whistleblowers appear not to have been properly applied.

"Threats against journalists doing their job fly in the face of Europe's commitment to free expression. If shown to have taken place, the officials responsible should have no role in Europe's service at any level and should be dismissed.

"I've spoken directly myself today to the representative of Federica Mogherini, the High Representative of the European Union. I know she is personally exercised by these reports and her decision today in response to the pressure from the European Parliament can be welcomed as strong, decisive and principled."