Joining forces to protect the NHS from TTIP profiteers 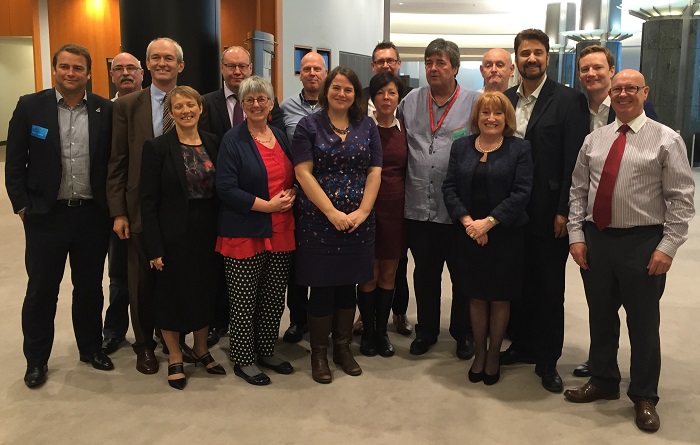 Labour MEPs have met with a delegation of senior trade unionists to discuss efforts to ensure public services are protected in any EU-US trade deal.

A delegation of Unite the Union's regional secretaries, led by Unite NEC chair Tony Woodhouse, met with Labour MEPs today in Brussels to raise their concerns regarding the ongoing negotiations around the TTIP treaty.

Unite's representatives reiterated that their legal analysis shows that under the current approach followed by the UK government and the European Commission, public services such as the NHS would be included in the scope of the trade deal.

Labour MEPs set out their view on the TTIP negotiations in the European Parliament, which adopted a resolution on TTIP in July. This included a Labour amendment calling for a full exemption for all public services, including the NHS, from any deal with the US.

This amendment was drafted in close cooperation with Unite as well as other public services employees' organisations, providers and users groups to ensure its wording would guarantee absolute legal certainty in any trade deal.

This demand from the European Parliament is yet to be addressed by the European Commission and British government.

"Together with the trade union movement, we've raised concerns about public services in TTIP, we've developed a legally sound way of addressing it and we built a majority in the European Parliament to support this alternative.

"It's now up to the European Commission and national governments to wake up to this new political reality: you can no longer afford to carry on with business as usual. If the NHS or other public services are left in TTIP, the people will not accept it and we will veto it."