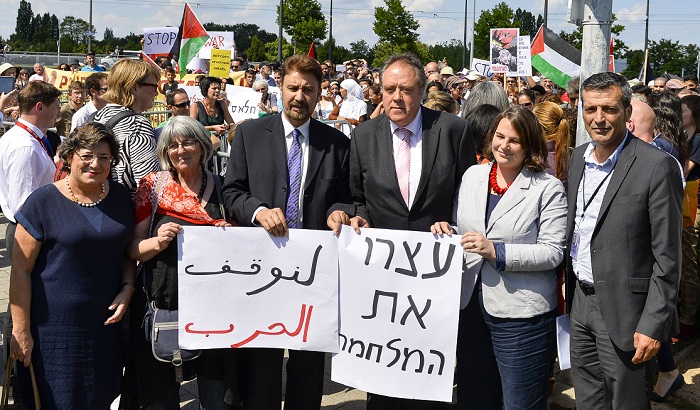 Labour MEPs played a leading role in successful efforts today to win strong, across-the-board parliamentary backing to call for an immediate ceasefire to end the death toll in Gaza.

Labour MEPs played a leading role in successful efforts today to win strong, across-the-board parliamentary backing to call for an immediate ceasefire to end the death toll in Gaza.

Richard Howitt MEP, Labour's European spokesperson on foreign affairs, took part in negotiations for a resolution agreed by the European Parliament condemning the loss of civilian life, backing regional efforts for mediation by Egypt and Jordan, and calling for all sides to respect international humanitarian law.

Mr Howitt, who has visited Gaza three times since Israel closed the borders, was joined by fellow Labour member of the European Parliament's foreign affairs committee, Afzal Khan MEP, and other Labour MEPs to meet protesters from Palestinian and Israeli peace movements ahead of today's vote.

"The immediate priority must be to end the tragic loss of civilian life, but there can be no long-term answer without peace talks towards the two-state solution.

"This week I've appealed directly to the Israelis to see Palestinian reconciliation as an opportunity not a threat. This could be part of necessary efforts to persuade Hamas, without in any way excusing their actions, that there can be a real alternative to violence.

"Just as the situation deteriorated rapidly from talk about a long-term truce between Israel and Hamas to the appalling violence of today, we have to support hopes that a path to peace can now be restored."

"We welcome the European Parliament's call for an immediate ceasefire, lifting up the blockade of Gaza, and for all parties to work to achieve a just and a lasting peace between Israelis and Palestinians. We urge the EU to have a more active role in achieving this."