Iran nuclear talks - how to avoid putting the 'dead' in deadline 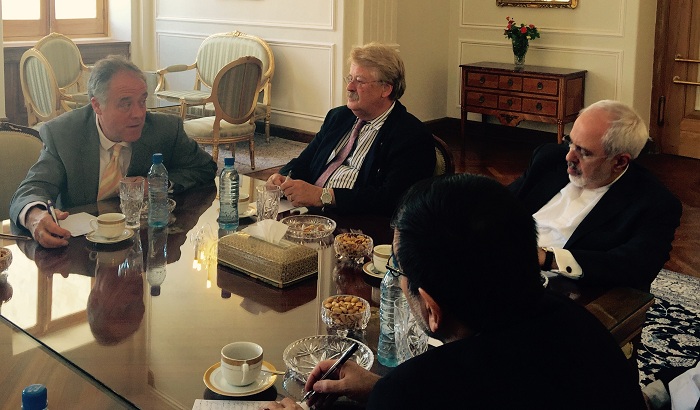 A European Parliament delegation visited Tehran this weekend for only the third time in seven years, to advance the prospects for reaching a comprehensive nuclear agreement with Iran by the final deadline of the the end of June. The evidence is of genuine intent from the Iranians - but any deal remains vulnerable to sabotage - and missing the deadline risks any prospect for political reform in the country, writes Richard Howitt MEP.

There have been as many false deadlines as false hopes in the tortuous negotiations which seek to limit Iran's ability to produce nuclear weaponry.

But the end of June date to finalise a comprehensive agreement looks pivotal, in the light of the July 9 deadline before extra provisions for congressional review apply, and the implications for the US to be able to deliver its side of the bargain on the lifting of sanctions.

Republican control of the US Senate on the back of Benjamin Netanyahu's controversial Washington speech - in open defiance of President Obama's approach - mean it is the Americans who are most running out of time.

There are too many who want to put 'dead' into 'deadline'.

That was the importance of the weekend's European Parliament talks in Tehran - only the third since the EU-Iran political dialogue broke down after the country's covert nuclear programme was uncovered in 2002.

It is not unusual for parliamentary diplomacy to be part of the endgame in such negotiations, with each side able to pass signals, test resolve and seek to exert public pressure for otherwise private positions.

In this instance the public pressure was not only against sceptics within European opinion, but an unspoken but apparent attempt for Iran's government led by pro-reform President Hassan Rouhani to demonstrate against their own internal conservative opponents: Europe's good faith in comparison to our American counterparts to deliver on sanctions relief if a deal is struck.

What did we learn?

That the 'reformer' versus 'conservative' split is a very real one. Representatives we met openly affirmed their allegiance and recognised their own country's parliamentary elections next year will see reform succeed with political credit for a successful nuclear deal or defeated through celebration of its failure.

International opinion needs to understand this significance to the deadline for the Iranians as much the Americans.

Iran's internal battle even meant our own talks were open to sabotage, after the previous visit was blown up in the press over an innocent failure of etiquette. This time there were apparent but hopefully unsuccessful attempts to create similar controversies over the correct wearing of the veil and over permissions for press access.

Yet all parties agreed our talks were remarkably more relaxed and constructive than previous attempts, including in their ability to acknowledge disagreement without the taking of offence.

We learnt sanctions work. Some may profit from what they call a 'resistance economy' and there was careful emphasis there is no 'desperation' to come to agreement. But it was clear the return of lost trade and investment is the key motivator which has allowed the country's religious Supreme Leader and its conservative Majlis (parliament) to maintain guarded support for the negotiations.

The ugly 1980s architecture and idle, half-finished building projects in Tehran itself were symbolic of how sanctions have cost the country.

The visit taught us Iran remains a tightly controlled society founded on an ideology which still sees its politicians called 'Revolutionary leaders' and its opponents termed 'the enemy'. It is a country which is importing technology from China to further restrict internal access to the internet and so-called 'defensive' missiles from Russia to prepare for military alternatives.

Attempts to portray the country as one of religious tolerance tested credibility. But the reconciliation with Saudi Arabia is a diplomatic challenge rather than one of sectarianism, and an energetic portrayal of legal and political rights - apparently accorded to Judaism - at least point to the potential for Europe to engage Iran in future efforts towards conflict-resolution, if full relations are re-established.

In the guise of urbane foreign minister Javad Zarif and his service, we saw a highly intelligent and undeniably sincere commitment towards the nuclear negotiations, based on a well-founded analysis of common interests in relation to regional security, the fight against drugs and the need to combat ISIS/Daesh.

Indeed, a repeated appeal by many we met for 'soul-searching' on the recruitment of foreign fighters from Europe, appeared to represent not simply an attempt to divert the argument in relation to the country's own responsibilities in relation to the conflicts in Syria, Iraq and Yemen, but also a genuine appeal for a more effective common action in combatting a common foe.

On human rights, a careful prior negotiation ensured the issue was fully able to be raised in all meetings, but sadly diplomatic advice was persuasive that any attempt to meet human rights defenders themselves would not simply have derailed the visit but caused a direct threat to anyone we saw.

Nevertheless there were robust exchanges including on use of the death penalty against children and in public. One of our concerns about the negotiations is that the provisional deal announced in Lausanne in March had led to a steep rise in executions to 12 a week, and that any final nuclear agreement could provoke a similar backlash from the conservative judiciary.

The evidence we saw and heard was that there are only slight improvements in human rights - in press freedom, education and culture - which appear to have been possible as they are under the control of ministries rather than the judicial and security authorities.

Our delegation did manage to elicit dates when two outstanding invitations for visits by UN thematic human rights rapporteurs will be honoured, and welcomed a forthcoming second joint-meeting with the country's judges on human rights issues led by our Italian colleagues. We welcomed apparent support for a human rights dimension when and if formal EU-Iran political dialogue is restored, following the nuclear deal.

The big question is whether the nuclear deal itself will be agreed and whether it is credible to both sides? My conclusion from our talks is that is that there is genuine intent, but that answers to both questions remain unknowable and dependent on each other.

Current 'difficult issues' we discussed on setting limits for nuclear enrichment in research and development activities, and on verification in relation to military sites, won't be resolved if further amplified.

However, it was made clear Iran is prepared to accept the higher level of inspections consistent with the Additional Protocol of the Non-Proliferation Treaty, even if it is careful not to presume the parliamentary prerogative to ratify that protocol, in a country where the parliament carries real teeth.

Overall the (unattributable) phrases I will remember from European and Iranian representatives during the talks were: "look them in the eyes", "it is easier to start a war than to finish it", and "if not now, when?"

The current moment represents a landmark opportunity for resetting US-Iran relations ever since George W Bush named the country as part of the world's 'axis of evil'.

It is the US government's view a nuclear agreement could be significant in securing Israel's security too, even if that isn't the view of the current Israeli government.  European diplomats fear Israel's motivation may be shifting the argument for blocking a deal which was supposed to be about limiting Iran's military capability, towards resisting economic or political progress for the country.

For Europe too, this would be an agreement brokered by what is acknowledged as the "EU3+3" and led by High Representative Federica Mogherini and her predecessor Cathy Ashton. An Iran nuclear deal would represent a notable achievement for EU diplomacy and its own landmark for Europe's ability to play a distinctive role as a global player alongside the United States.

Not only would the EU plan to open its own embassy in Tehran, as would Britain, but it could herald a new era of cooperation in which Europe can help bring Iran back in to the international community and into respecting international norms.

For Iran, all segments of its society would welcome the lifting of sanctions and an important step towards ending the international isolation. The country has always denied any intent to build nuclear weapons but a successful agreement would also deny them the capacity to do so. It may pave the way towards new hope in a troubled region.

But in Iran, it is those who want to use an agreement to advance the cause of political reform who are strongest in their welcome, and those who resist it who appear to fear it most.

Richard Howitt MEP took part in the delegation as the Socialists and Democrat (S&D) Group spokesperson on foreign affairs. He is also chair of the European Parliament Working Group on the Middle East and North Africa.