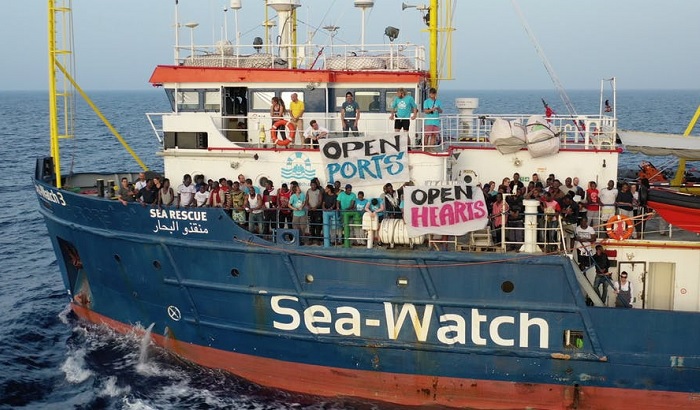 New European Commission president-elect Ursula von der Leyen must clearly and immediately commit to act to act to prevent national governments from criminalising humanitarian assistance, a Labour MEP warned today as the European Parliament debated the situation in the Mediterranean, including the Sea Watch scandal, where the captain of a ship was arrested in Italy after disembarking more than 40 people she had heroically rescued at sea.

“It has been exactly a year since the European Parliament called on the Commission to provide guidelines to prevent humanitarian assistance from being criminalised.

“The odyssey of Sea Watch 3 and Carola Rackete and the actual and repeated prosecution of individuals and organisations have shown the importance of these guidelines. The Commission and Commission President Ms von der Leyen need to clearly commit to issue these guidelines.

“I welcome that Council discussed a voluntary temporary disembarkation and relocation mechanism this week. This could be a first step to overcome the inertia in Council on the Common European Asylum System and Dublin for a system that is based on solidarity.”

“We have seen in recent weeks the tragic attack on the detention centre in Tajoura, near Tripoli that led to the death of dozens of migrants. The airstrike killed more than 60 people.

“Thousands of refugees and migrants are trapped in detention centres in conflict areas and are exceptionally vulnerable - they are being exposed to fighting, particularly around Tripoli. Libya is not a safe country and NGOs that save the lives at sea of those fleeing war and torture deserve full support from the EU.

“And two weeks ago, 83 people drowned off the coast of Tunisia, the second deadliest incident of this type in 2019.

“So far this year, 682 people have died or gone missing. Without action, compassion and justice, hundreds, thousands more will die.”

“We are once again discussing the lives of thousands of men, women and children who every day attempt the perilous journey across the Mediterranean, fleeing conflict and unsustainable lives.

“Carola Rackete, the captain of Sea-Watch 3 who was arrested last month for docking the search and rescue vessel in Italy without permission, trying to save hundreds of lives, is not a criminal, as Salvini would have you believe, but a heroine.

“The European Parliament must lead on this issue. Saving these people’s lives should not be politics but a duty and a moral obligation.”