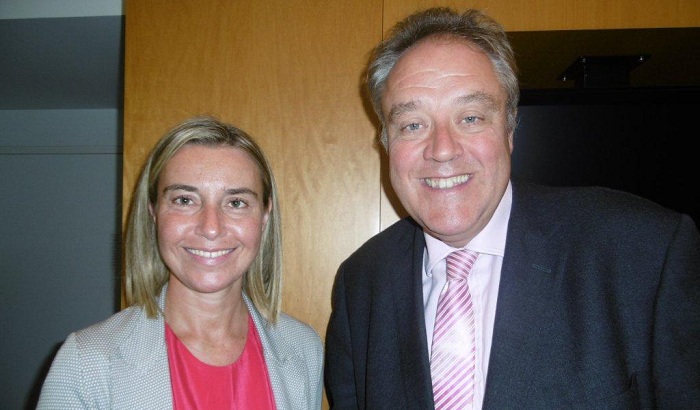 Speaking on behalf of the Socialist and Democrat (S & D) Group of parties, of which Ms Mogherini is herself a member, Labour's European spokesperson on foreign affairs, Richard Howitt MEP, used his questioning to help her dismiss attempts from some parts of the media to portray the Italian as "soft" on Russia.

"Foreign ministers will always pursue the national interest of their country, as they should.

"As Italian foreign minister you have been a member of the Foreign Affairs Council, so now it is crucial you bring lessons with you on how you can give leadership to ensure EU foreign ministers can at the same time be more united."

In her answer, Federica Mogherini said:

"We have to reject that the national interest is always against the common interest. We have common interests or we wouldn't be together. There are lots of things we can achieve only by working together."

Richard Howitt MEP then used an analogy to ridicule "false alternatives" over the Ukraine crisis aimed at Ms Mogherini following her nomination, between sanctions against Russia and pursuing a negotiated solution:

"Wildlife experts say if you're confronted by a bear you can choose between standing close to others in your group, making as much noise as possible, to present a more intimidating front. Or alternatively speaking softly and reassuringly, gently retreating backwards.

"If you confront a Russian bear, Ms Mogherini, which tactic would you use?"

"I don't have much experience of bears but I think I'm going to enjoy this committee. We need a mixture of assertiveness and diplomacy."