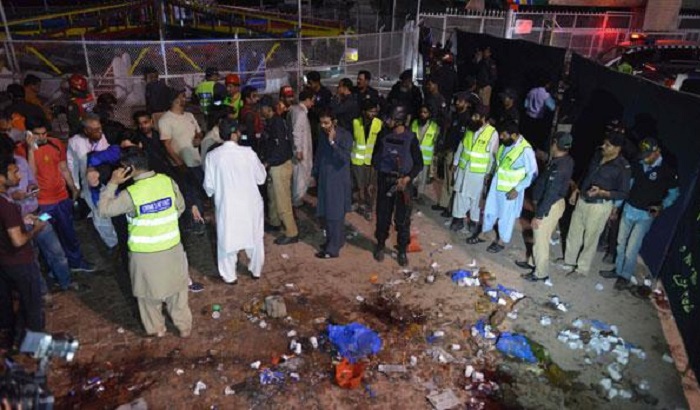 Labour MEPs voted today for a resolution that unequivocally condemns the attacks on a playground in Gulshan-e-Iqbal Park in Lahore on March 27 where a suicide bomb attack caused the death of more than 73 people and injured more than 300, including many women and children.

The terrorist group Jamaat-ul-Ahrar has claimed responsibility, openly claiming it had targeted Christians. However, the majority of the wounded and killed were Muslim Pakistanis.

Labour MEPs also warned that the best way to offer support to Pakistan in the fight against terrorism is by remaining in the European Union.

"We strongly condemn this attack in Lahore and extend our deepest condolences to families and friends of the victims. In the last three decades, Pakistan has suffered immensely due to terrorism. More than 60,000 people have lost their lives. At this sad hour for all Pakistanis, we in Europe must offer our sympathy and support.

"Pakistan is leading the fight against terrorism in the region. The EU and the international community need to support and acknowledge Pakistan's overall progress in fighting terror.

"Their success at home and the wider Middle East in suppressing the threat of terrorism makes us in Europe safer as well. Therefore, Pakistan is one of our most important allies in fighting international terrorism."

Speaking about the criticism that some Eurosceptic British Muslims have towards European policies, particularly in relation to the sub-continent, Mr Khan said:

"When tragedies strike, as they so often do these days, we instinctively know we must work together to fight the malice that threatens us. When terrorist attacks or natural disasters happen, Pakistan receives important assistance from the European Union worth hundreds of millions of euros, through its disaster relief, aid and development programs.

"We must not take this assistance for granted. If we would leave the Union, Britain alone could never be as supportive of Pakistan as the Union as a whole is.

"The laws and practices of the European Union are not set in stone. If Britain remains part of the European family of nations, we can work to change its rules. If we are out, we have no control over continental European policy, and we cannot influence the Union´s foreign policy, not just in relations to Pakistan, but also the Middle East and wherever else Muslims live."

"As we feel the shock of terrorist attacks in Paris and Brussels, let us recall that the Global Terrorism Index shows only 0.5 per cent of its victims are in Europe and the West, and more than 80 per cent of those killed by terrorists in the last five years have been Muslims.

"So we mourn the 72 victims in Lahore. Terrorists who targeted a children's playground at the height of holiday celebrations, to inflict most harm on those who are most innocent.

"With all countries with whom we cooperate in fighting terrorism we seek to uphold human rights and the rule of law, and we say the same to our friends in Pakistan today in our resolution.

"We oppose the death penalty and ask Pakistan again to consider whether all executions are genuinely linked to terrorism, especially in the light of research by the Justice Project and Reprieve that they are not.

"We call for clemency in the case of Abdul Basit - but we do so in steadfast opposition to terrorism and in full solidarity with Pakistan and all countries who suffer its victims."