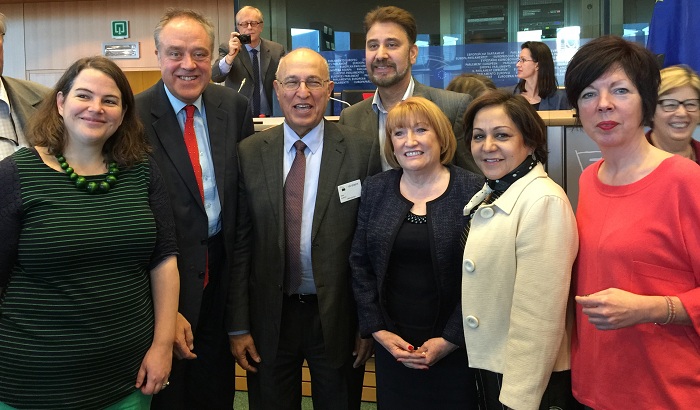 A European Parliament vote in favour of official recognition of Palestinian statehood today has been led by Labour's MEPs.

The vote represents a push for all European countries to give coordinated recognition - supporting a bid at the UN also expected this week - for a global deadline to be set for a new Palestinian state to be not just recognised but established.

MEPs voted by a big majority, 498-88, calling for an EU "common position" on recognition, proposed by Labour's Richard Howitt MEP, as foreign affairs spokesperson of the Socialists and Democrats Group.

He chaired intensive negotiations and was able to secure the agreement of the five main party groupings in the parliament. The Conservative Party, however, left it to a free vote of their MEPs.

Mr Howitt and his fellow Labour member of parliament's foreign affairs committee, Afzal Khan MEP, describe today's vote as a stepping stone to seeking European support in the UN and follows similar successful votes for Palestinian recognition in British, French, Irish, Portuguese and Spanish parliaments and by the government of Sweden.

Richard Howitt MEP, who is also chair of the European Parliament sub-committee on the Middle East, said:

"It is right that the European Parliament reflects the initiative for Palestinian recognition which is sweeping parliaments right across Europe, from the House of Commons to the Assemblée Nationale, and which today sees us agree that this should be a common position for all EU countries.

"We know recognition is being discussed by EU foreign ministers and, if the expected debate takes place in the UN, we are issuing a clear signal Britain and other European countries should seek to give our support.

"Today's vote is a political rather than a legal decision but the strength of the majority will send a strong message of Europe-wide support for the principle of Palestinian statehood.

"European recognition of Palestinian statehood is neither an alternative to a two-state solution nor for peace talks to achieve it, but could be a vital injection of impetus towards both."