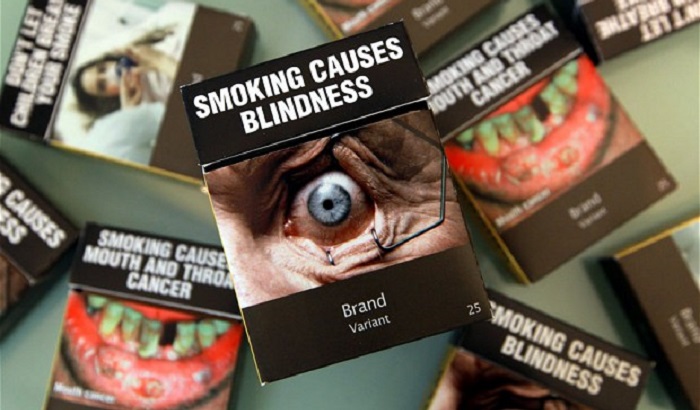 The court struck down the challenge from four of the world's biggest tobacco firms, Philip Morris International, British American Tobacco, Imperial Tobacco and Japan Tobacco International, with the judge, Mr Justice Green, ruling the regulations are "valid and lawful in all respects".

Also tomorrow, the EU tobacco products directive (TPD) comes into force across the European Union, under which graphic health warnings must cover two-thirds of cigarette packs, with an immediate ban on flavourings in cigarettes, as well as a ban on lipstick, and perfume packs, with a menthol ban phased in from 2020.

E-cigarettes will be regulated, having to meet certain quality and safety standards, including a strength limit - and if companies claim e-cigarettes help smokers quit, they will have to seek a medicines licence.

"Today's court case shows the desperation of the big tobacco companies - it's great news their challenge has been thrown out, as happened when the European Court of Justice ruled against them earlier this month.

"The big tobacco companies did everything to block these laws, employing hundreds of lobbyists along the way, but they lost their cases in what is a major victory for health campaigners.

"Let's hope the law will lead to fewer young smokers being recruited by tobacco companies."

"The plain packaging regulations and the tobacco products directive - which I steered through the EU law making process in the last Parliament - become law in the UK and across the EU tomorrow. This will mean an end to gimmick tobacco products such as "lipstick" packs, chocolate cigarettes and other marketing ploys designed to lure teenagers into smoking.

"Four thousand British children start smoking each week - that's a staggering 200,000 new childhood smokers a year. More than 700,000 people a year die in the European Union as a result of smoking and 70 per cent of those started smoking before the age of 18. Nearly half of all smokers will die from a smoking related disease and tobacco is still the leading cause of preventable premature deaths across Europe.

"These new laws are an important step towards preventing children taking up smoking."