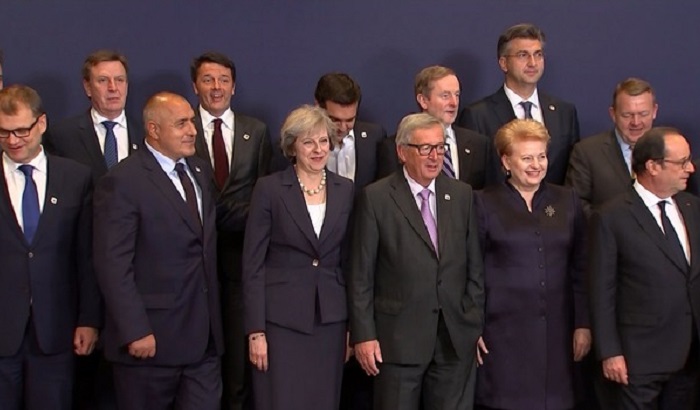 1. Negotiating with our EU partners will be tougher than the Brexiters think: For all the internal government wranglings over what kind of Brexit it will be – crystallised in the May/Hammond disagreement on migration – this summit has reinforced that ultimately it is the rest of the EU that will have to agree what kind of deal we get. French President Francois Hollande summed it up by warning that if Theresa May wants a “Hard Brexit” she should expect “hard negotiations”. The Brexiters’ fantasy of a pick ‘n’ mix, keep all the good bits deal is disintegrating before our eyes.

2. Theresa May will say one thing in Brussels, and another at home: Just like her predecessor David Cameron, Theresa May will play whatever tune she thinks her audience wants to hear, reprising her role of backbencher-appeasing tubthumper at the recent Tory Party conference (plans for lists of foreign workers etc.), while acting the responsible stateswoman abroad, insisting she wants the EU to be strong and for Britain to remain at the centre of EU decision-making. It is of course vital that we are, but under Theresa May’s premiership, the opposite is true – her disaster of a Tory conference has hardened views and has made the job even tougher.

3. May has isolated Britain more than ever: Far from being at the heart of Europe until it leaves, Britain is now even more isolated than before, with the prime minister “sidelined and snubbed” in Brussels. If she thought September’s meeting in Bratislava of the other 27 EU countries was a one off, she can think again – there’s another one planned for Malta in January. The rest of the EU meeting to decide our future, and discuss the present, without our presence. Britain has voted leave, and lost control.

4. The European Parliament has asserted itself into the Brexit debate: Theresa May does not just need the agreement of her fellow EU leaders for a Brexit deal, but the European Parliament as well – the EP must approve any deal that is reached. And at the summit we have seen the parliament show its teeth, with President Martin Schulz reiterating the EU’s position on membership of the Single Market: “The fundamental freedoms are inseparable, i.e. no freedom of movement for goods, capital and services, without free movement of persons.”

5. CETA impasse highlights difficulty UK will have in striking EU trade deal: The other main agenda item this week was the deadlock over the EU-Canada trade deal, the Comprehensive Economic and Trade Agreement (CETA). Negotiations on CETA began seven years ago, and remain unconcluded. All 28 EU governments back it, but it has been blocked by the Wallonia Parliament. If a small Belgian region has the power to block CETA, it has the power to block a future EU-UK trade deal; if international trade secretary Liam Fox still believes Britain can wrap up a deal post-haste, he really is deluded.

This blog can also be found on Left Foot Forward.