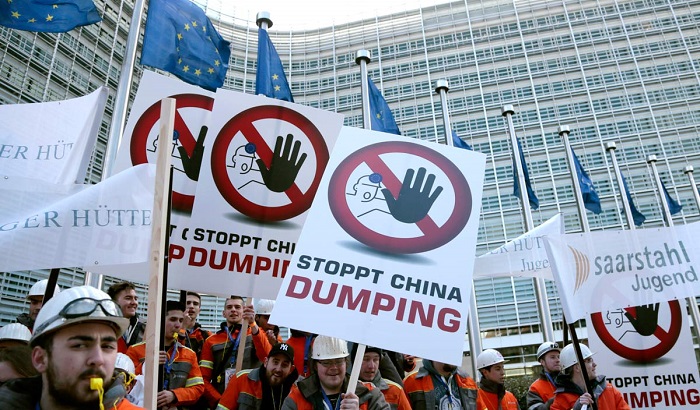 Labour MEPs will vote today for new EU laws to define unfair trade practices. The new methodology of calculating what constitutes a “significant distortion” will enable action to be taken against countries like China that have dumped cheap steel onto European markets.

The UK government, however, last week said that it will not toughen its trade defence measures, even if the EU does, prompting warnings from the steel industry that a failure to match the EU’s tough stance on dumped imports after Brexit will put thousands of British jobs at risk.

The new criteria will also include social and environmental factors when evaluating the probity of trade practices - a world first.

“A year ago, steelworkers were marching in Brussels to protest the dumping of cheap steel and calling for China to be denied Market Economy Status (MES), concerned that thousands more jobs were being threatened.

“Labour MEPs have long pushed for action, and the EU has now delivered - a welcome step. What a contrast with the attitude of the Tory government. They continue to drag their feet in granting our workers and industries the protection they need against dumping whether in the EU negotiations or through the weak post-Brexit proposals on trade remedies.

“Here for the first time ever in trade defence regulations, social and environmental criteria will also be assessed, a first step towards an effective recognition of the effects of unfair trade practices on workers and the environment.

“We now have a much more progressive alternative before us, but this is just one part of the EU’s endeavour to strengthen its trade defences. We’ve reached a deal on MES, we now need a deal to modernise the overall trade defence instruments in order to really save European steel.”

“This is a great start, but only a start. Now we have a methodology to calculate what constitutes market distortions - and remember it is the European Parliament that has led national governments on this - we need to get on with the urgent task of strengthening sanctions and actually taking action against those countries that break the rules.

“During negotiations the European Commission and especially the Council took a clear commitment to make substantive progress on trade defence instrument modernisation before today’s vote, but to our great disappointment we have to date not seen any significant move made by ministers.

“Today’s vote sends a very clear message: the Council and Commission must now engage more constructively on trade defence, and the UK government must back any action and match, not dilute it, after Brexit. Our industry needs effective measures not only against China but against all those countries engaging in unfair trade practices.”