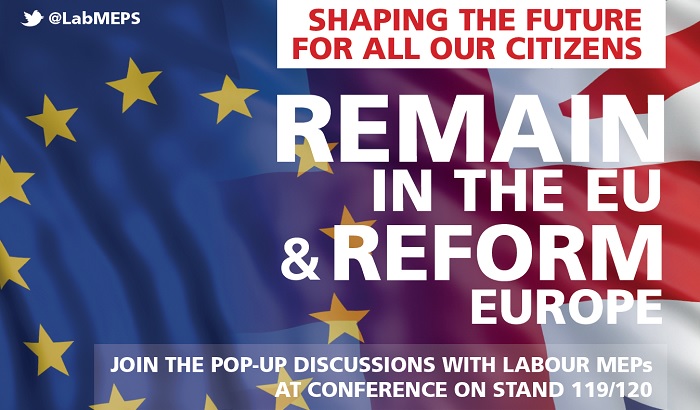 This year at the Labour Party Conference, the European Parliamentary Labour Party will be doing something different - we'll be running a series of pop-up discussions on various topics on the theme of "Remain and Reform".

In addition to Labour's MEPs making the case for us remaining in the European Union and outlining reform ideas across a range of areas, we will be joined by guest speakers including GMB general secretary and leading trade unionist Tim Roache, Labour MP and now shadow Treasury minister Anneliese Dodds and Italian MEP Brando Benifei, bringing us the persepective from the rest of the EU.

All the debates will take place at our stand - number 119/120, on the upper level overlooking the seafront - where you can also pick up our latest leaflets outlining some of our achievements in key areas, from tax to climate change and workers' rights to equality, and the policies we're working on to reform Europe and ensure we remain in the EU.

The current schedule for the pop-up talks is:

Monday 23 September 10:00am:
Brexit: Where are we, what happens next, and how do we win the debate?
Richard Corbett MEP (Leader of Labour's MEPs, Labour MEP for Yorkshire and Humber and member of the European Parliament Constitutional Affairs Committee)
Brando Benifei MEP (Partito Democratico MEP and member of the European Parliament Internal Market and Consumer Protection Committee)

Monday 23 September 11:30am:
No jobs, no skills, no control - how do we challenge the Artifical Intelligence dystopia
John Howarth MEP (Labour MEP for South-East England and member of the European Parliament Budgets Committee)

More guest speakers to be confirmed - for the latest news and updates, follow @LabMEPs, and follow all our MEPs at twitter.com/LabMEPs/lists/labour-meps - and you can submit your reform ideas at eurolabour.org.uk/reform.

We look forward to seeing you in Brighton!