Starmer, O’Grady warn May: We will oppose any Brexit deal threatens jobs, rights and standards 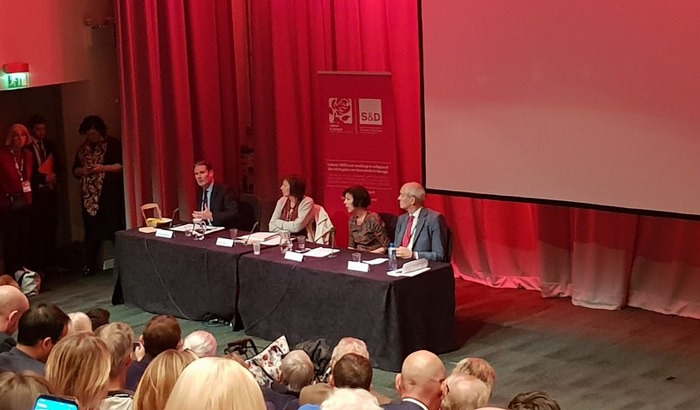 Shadow Brexit secretary Sir Keir Starmer and TUC general secretary Frances O’Grady joined with Labour’s Leader in the European Parliament, Richard Corbett MEP at the EPLP fringe event at the Labour Party Conference to reiterate to Theresa May and the Tory government that any Brexit deal - such as the so-called Chequers deal - that threatens jobs, rights and standards was unsupportable.

Starmer, O'Grady and Corbett spoke on the theme "43 Years of Labour in Europe: Battles won, battles lost, battles for the future", highlighting Labour wins in the EU which are at risk from a Tory Brexit, reflecting on what else might have been achieved and looking at how we can strengthen our relationships with the Europe-wide labour movement.

“Looking at the current state of affairs, the next few weeks and months will need to see some very important decisions. But the prime minister can’t take any steps to close the gap.

“She made a fundamental mistake with her October 2016 red lines. In one breath she says she wants a deep and special relationship – then says no single market and talks about citizens of nowhere.

“Chequers was an attempt to break out of the straightjacket, but it has failed. Theresa May must be the only person who is surprised the EU won’t accept Chequers.

“We have three-and-a-half weeks to the October summit, and there could be a November summit after that – there is a very small gap between the two.

“Remain or leave, we need to think about what sort of relationship we have. But under the Tories’ plans, we won’t be able to have an economically close relationship, one that is collaborative and cooperative. Her answer was a blank piece of paper.

“Having worked in Northern Ireland and been over in my current role, let me tell you this – no one believes you can avoid a hard border without deal that keeps us aligned.

“As we go through the next weeks and months, to the vote in parliament, we will apply our six tests, and if a deal doesn’t meet them, we’ll vote against.

“No deal is not something to be causal about. No deal would be catastrophic. They have not worked through the consequences of what it would mean, to our trading relationship and everything else.

“The TUC and trade union movement were never starry-eyed about the EU. We listened very carefully 30 years ago, when Jacques Delors came to congress and talked about peace, and balancing the four freedoms.

“It is very clear the single market is the only trading bloc in the world that has written into its rules rights for working people to have a voice, rights that matter, like paid maternity leave, which I was personally involved in campaigning for when I was pregnant and had my first child. Likewise with holiday pay – I am astounded people forget part-time workers had no holiday pay.

“They are trying to pull the rug away; it’s shock and awe. They are ready to come for us, but this we time won’t have the protection of Irish, French and German trade unions to support us.

“We are hard-headed pragmatists – but what kind of trading union will we have under Brexit? Whose values? Trump’s America? With our NHS carved up. Putin’s Russia? China? Singapore?

“In all these places, workers do not get the rights we have. We reject this Hobson’s Choice the government is trying to give us, of no deal or a bad deal.

“If Theresa May doesn’t not give us a deal that protects us, we will through our weight behind the campaign for a popular vote.”

“In the EU, battles are not as the media says between countries, they are left-right political battles, and we have more wins than losses.

“The single market is a market with rules, on workers’ rights, consumer protections and environmental standards.

“It could be better, but they are significant enough for the neoliberal right to go apoplectic, and is why the right wing of the Tory Party are so keen to leave the EU and EU standards. They want a market that is a free-for-all.

“I’m glad Labour has six tets and will oppose any Tory deal that does not meet them.

“Any deal that is jobs-destroying and rights-threatening will undermine our finances and that is why we are right to oppose it lock, stock and barrel.

“We have a composite motion – it addresses issues of what will happen next. It says we will keep all options on the table, but rules one option out, that of no deal.

“What can you then do? Negotiate a different deal. That only happens if there is no general election. Rely on the Tories to negotiate a deal?

“Or we reconsider. The resolution itself refers to what trade unions do when they negotiate a deal, they put it back to workers to confirm yes or no.

“When you buy a house – when the survey comes back, and reveals shaky foundations, cracked walls and creaking foundations, and a leaky roof, you can say no.

“We can say no if we want, it’s perfectly legitimate.

“Leave voters are entitled to feel hard done by, “it’s not what I was told, not what I voted for”. People were told it would be easy, with lots of money to go to the NHS, and new trade deals from day one to replace EU deals. Everything promised by the leave campaign is turning out to be undeliverable.

“We face a damaging, jobs-destroying, rights-threatening Brexit - the possibility to remain should and must be on the table.”