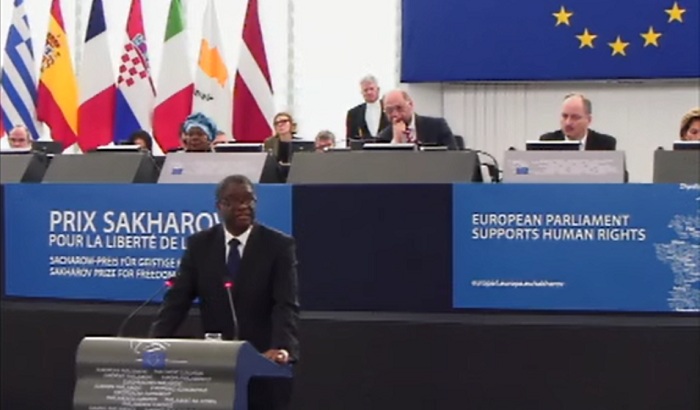 Labour MEPs have praised Congolese gynaecologist Denis Mukwege, who received the Sakharov Prize for Freedom of Thought in the European Parliament today.

Dr Mukwege founded and works at the Panzi Hospital in Bukavu, where he specialises in the treatment of women and children who have been the victims of extremely violent sexual assaults by rebel forces. Mukwege has become the world’s leading expert on repairing the internal physical damage caused by rape.

He provides medical treatment to victims who have been subject to violent rape, and teaches other surgeons to perform this type of operation. Since 1999, Dr Mukwege has treated more than 40,000 victims of rape.

"As we mark the International Day for the Elimination of Violence against Women, we also congratulate Denis Mukwege for his award of the Sakharov Prize.

"Dr Mukwege's work is a stark reminder of the continued horrors of violence against women today, but also of the determination to act. He is a heroic advocate for the rights of women, at great personal risk, and has raised awareness of the issue of rape as a weapon of war and trained other surgeons.

"Across the globe, wartime rape affects millions of women and children who bear the physical and mental scars of their traumatic and harrowing experiences. Rape in conflict zones is a war crime - the international community must take urgent action to end this barbarism."

"As chair of the development committee in Parliament, I will work to highlight the issue of violence against women and girls in emergencies and the need for the EU to have a clear action plan to combat such violence.

"At a special summit in London last year, a number of governments, international agencies and non-governmental organisations signed a Call to Action to prioritise women and girls in emergencies. The UK, the EU's humanitarian aid department and several other European governments have signed up. We need more to sign up, and we should explore whether the European Parliament can sign up too.

"Today we give the Sakharov prize to Dr Mukwege to recognise his huge contribution to caring for women victims of sexual violence, but with more stories of atrocities against women coming out of Syria, Nigeria and many other countries, we need real action.

"The EU must work with national governments to better combat this issue."