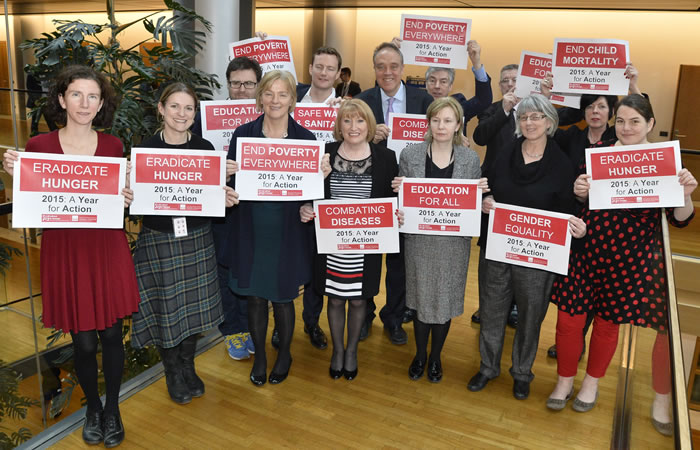 2015 is the year Europe needs to act, to ensure the poorest people in the world are not forgotten.

We need to make sure 2015 - the European Year for Development - is a European year of action. So much has already been achieved, and we're on the right road, but we're only a fraction of the way there, and we must set ourselves ambitious targets to take us forward.

Labour MEPs will work to put pressure on the European Commission and national governments to ensure all the talk on development is matched by ambitious commitments to end extreme poverty, and as a Labour MEP is the chair of the European Parliament development committee we will make sure the parliament takes a lead on it.

It was Labour in government who established the Department for International Development, and it is Labour who are pushing for the goal of 0.7 per cent of GDP to go towards development assistance to be enshrined in UK law. We will push other EU countries to make this same commitment as part of their pledges for development finance, which EU governments will decide on in the coming months ahead of a global conference on financing in July 2015.

If we are to achieve the aim of ending extreme poverty we need strong, ambitious goals. Labour MEPs are calling for targets to include: the end of extreme hunger and malnutrition by 2030; ensuring all children, both boys and girls, receive a decent education; ending systematic violence against women and girls and empowering women to play an equal role in their societies; and providing access to safe drinking water and sanitation for all by 2030.

The UN's Millennium Development Goals (MDGs), agreed in 2000, have played a crucial role in efforts to help the world’s poorest people, lifting 700m people out of extreme poverty and providing clean water to an extra 2.3bn people. Since 2004, EU funding has facilitated: vaccinating 18.3m children against measles; distributing 18m insecticide-treated bed nets; 37,000 schools built or renovated; and technical and vocational education and training for 7.7m people.

The MDGs have been a good thing and there have been positive outcomes, but work is nowhere near finished and we now need the replacement Sustainable Development Goals (SDGs) to be concrete and ambitious. So we need Europe – both EU and national leaders – to ensure 2015 is not just a year of celebrating past progress, but also a year of action. Labour MEPs will do their part in keeping up the pressure.

For as long as there are people on this planet suffering, living in poverty, dying young, scourged by war, plagued by famine, ravaged by disease, as long as men, women and children needlessly die and die and die, our work will not cease.