EU summit: Theresa May as isolated and clueless as ever 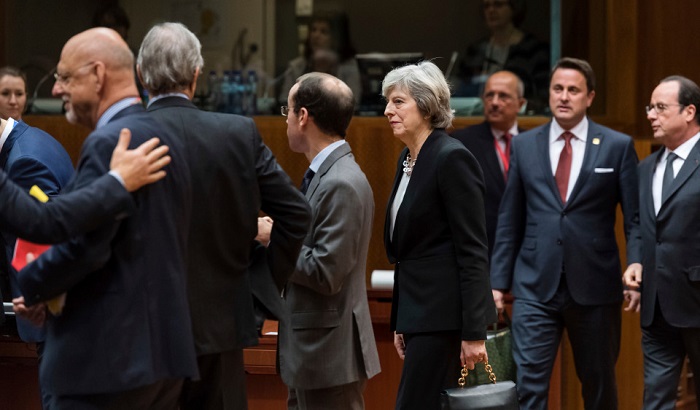 Glenis Willmott MEP, Labour’s Leader in the European Parliament, on what we've learnt from the latest EU Leaders’ summit...

1. May’s isolation continues: It’s a depressing sight, and the sign of things to come for Brexit Britain - caught on camera, the prime minister of the United Kingdom arrives at an international summit and is ignored by her colleagues, shuffling around looking for someone, anyone, to talk to. And to compound it, she’s excluded from the end-of-summit Brexit discussions. It’s like going to a party, sitting alone, then being asked to stand outside while everyone else talks about you and decides your future. A leader without influence, isolated, invisible; far from taking back control, the UK government has lost it.

2. May is as clueless as her ministers: Just like her Brexit secretary David Davis, Theresa May still has no real plan on how to deliver Brexit; Davis, appearing before the DExEU select committee this week, reprised his Question and Unanswer act, speaking while revealing next to nothing. Davis once again kicked the plan down the road, saying it will not be published until February. At the earliest. It's not convincing parliamentarians and it's clear from the reactions of other leaders at the summit, keen to know a bit more a bit sooner, that the government doesn't have a plan.

3. The European Parliament bares its teeth: The President of the European Parliament, Martin Schulz, reiterated to EU leaders the need for MEPs to be more involved in the Brexit process. It follows the parliament's chief Brexit negotiator Guy Verhofstadt’s threat to open up separate negotiations. A majority of MEPs must vote for any exit deal, and the best chance for this to happen is if they feel they’ve been involved in the negotiations. If the European Parliament doesn't back it, we'd be left with the worst possible result - the hardest of hard Brexits, in which the UK leaves without any kind of deal in place.

4. Post-Brexit trade deals will not just magically appear: The pre-summit revelations from internal government briefings that European politicians have warned a UK-EU trade deal could take “up to ten years” adds to the sense that ministers don’t really know what is going on. It is now six months since the Brexit vote, Britain still has no plan and EU leaders have only just agreed how they'll talk to each other in negotiations. Whether it's with the rest of the European Union, America, India, Australia, wherever, the idea peddled by leave campaigners that Britain could waltz out of the EU and strike better and faster is being further exposed as the undeliverable £350m-esque post-truth promise it always was.

5. The world has bigger priorities than Brexit: For the rest of the world, international politics isn't just about Brexit - Syria and the genocide in Aleppo was the number one priority at the summit, and rightly so. The refugee crisis and the EU's ongoing response to it was also high on the agenda. And in such unstable times, and with no direction from Theresa May, the patience of our negotiating partners is wearing thin - and that's bad news if we want to avoid economic turmoil when the two-year negotiations come to an end.