Combating the rise of populism 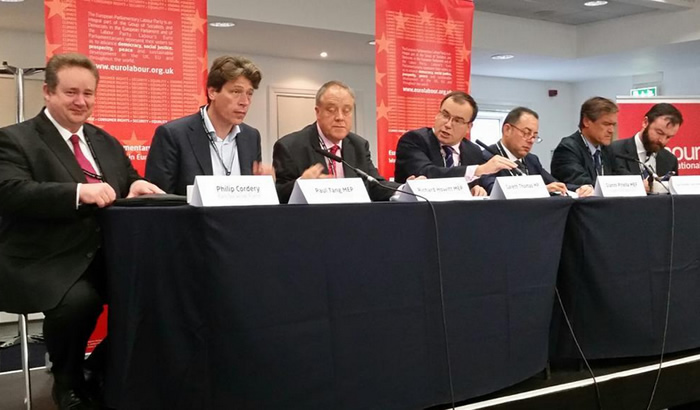 Centre-left politicians from across the world gathered to discuss how to combat the rise of populism in Europe at the EPLP breakfast fringe at the Labour Party Conference, concluding we needed to be less boring, re-engage with the public, address their fears and take the fight to extremist parties - of the far left as well as right - with jobs and growth for all the key to defeating them.

“The far right is on the march. Sweden Democrats are the third largest party in Sweden. Front National could win in France. This is an economic, social and political crisis. The people of Europe face poverty, unemployment and austerity. The threat of migration is used as an excuse. This crisis is not just economic - there is a loss of trust in the system among blue collar, white, poor voters.

“We need tangible proposals and an honest approach. We need to re-engage the public and reconstruct the left wing. Austerity has undermined social stability - we need better laws to reengage citizens. Too often it appears politicians do not care. We must use the tools of direct democracy to show legitimacy - we need to promote an inclusive Europe.

“2002 was a crucial year. We took a severe blow in that election from the far right. The time to fight populism had come. But we haven’t made much progress since 2002. We need growth and jobs in Europe. If five years from now we haven’t seen growth, we’ll be in trouble. We need a co-ordinated response. It is crucial we don’t get stuck in a Japan scenario and don’t ignore the problems of voters. Ignoring problem in public attitudes in the 80s led to a changing climate - the Dutch felt alienated. We started to ignore the problem and paid later for that. We lost voters.

“We must be honest. Jobs and growth are a pre-condition to combating them. The problem is also more to do with globalisation, competition from foreign firms. Social, economic, cultural problems are at stake, and identities.

“Globalisation has the same effect on any community - local, regional, national identities. If you want to take control, you’ve got to do something that is nearby. We can learn from football clubs - Manchester City and Chelsea, supporters are united, all of them support the multinational, multicultural teams on the field. How do football clubs do that? It’s time to look for ways we can fashion identities and give people self-respect and identity. We are still struggling in this event.”

“Don’t be boring. Populism is the new style of politics. Many of us feel politicians are boring – the style of politics has converged. The way we speak, the way we represent ourselves. We’re boring, we’re creating a space in which the clear and crisp succeed. Don’t be snobs. But don’t panic. In most electoral systems they are quite weak - they may get a sixth of the vote but don’t make the gain to a third. These parties are contained at a sixth of the vote. We need a more active style of listening. We need to grow our economies - coming out of recession helped us contain populism.”

“In the 80s, support for populist parties went up because of the economic crisis, from 0-15 per cent. Since then Front National gained steadily in the country. In 2002, Le Pen made the second round. He came close to power. He’s an ageing, extreme racist, but the Front National was really intelligent in its tactics. They changed leader in 2007, they appealed to their old voters, but used new rhetoric, and tried to recast the party. But behind it still lies the old anti-immigrant rhetoric.

“The pure anti-immigrant vote started to go up in the 1990s and 2000s. They were strong in urban areas, and have extended into rural areas - look at a map of poverty and you see a map of FN. We’ve seen an extension of their vote in the whole of the country. They use social media extensively, they attack and are aggressive. They are appealing to the poorest.

“In the debate between Melenchon and Le Pen, she managed to appeal more to the working class than he did, he was too intellectual. They had MEPs, councils, political office. It’s easy to be an opposition party. We should not underestimate nor overplay them, but keep the right balance. The only solution is to manage the economy. If you put that right, we will see more social cohesion across Europe.”

“We need to be honest in our campaigns - the best weapon for the populists is our unkept promises. We need to engage and need to be clear what we’re doing – growth, debt reduction. Talking about this does not mean you have to go on their field. Immigration is an asset, not a burden. We need to regain battle of the agenda and keep up our identity.”

“Populism is simplistic answers to the most complex questions. These are the consequences of the terrible crisis that has brought about anger and frustration. The left populists offered very simple answers - leave Nato, be against liberal-oriented economic policies - and pose a challenge to the Socialist Party as the main alternative to Conservatives. We are trying to build an alternative - serious, responsible, credible - challenging austerity. We need a fiscal response across Europe and in Spain, fiscal progress, a democratic response.

“We are fighting the consequences of globalisation, the transformation of the world and politics. It poses a major challenge to the sustainability of the welfare state. In political terms, so many are challenging the credibility of politics and policy. Our brands might be largely negative and have got to be changed.

“Migrants can be a positive contribution to an ageing Europe. They have been vilified by populistic comments which have created hysteria, fear and despair. The Response has to be coherent. We need to fight against inequality, and have a proper response to better protect the most vulnerable. The far-right are trying to depict migrants and foreigners as the problem. In Spain we also have left-wing populists, who are providing the wrong answers to real problems of the impoverished working class.”

“The BNP are gone but UKIP are on the rise. They are extremist, populist, hard right. They represent the same electoral appeal. Their rhetoric is anti-immigrant, extreme and nasty. They are benefiting from a protest vote. Our criticism didn’t get enough purchase. They have huge exposure - Nigel Farage has been on Question Time more times than anyone.

“But they are naïve politically - we can out-organise them. We’ve got to get those messages through to older, unskilled, white working class voters. They need to hear what we’re offering, a direct offer. Wages and rights are such an important part of this mix. We have to recognise the challenges.”