We will fight Boris all the way, Labour MEPs warn as citizens’ rights campaigners brace for no-deal disaster 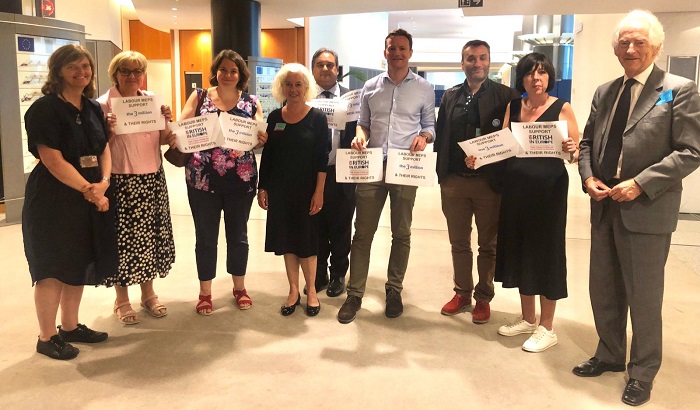 Labour MEPs today vowed to fight Boris Johnson every step of the way if the new Tory leader presses ahead with a no-deal Brexit that threatens the rights of the more than three million EU-27 citizens in the UK and one-and-a-half million UK citizens in the rest of the European Union.

Campaign groups the3million and British in Europe met with Labour MEPs today in the European Parliament to highlight their concerns about the incoming prime minister and reiterate calls for the ring-fencing of citizens’ rights if the UK leaves the EU.

British in Europe says a ring-fenced agreement is preferable to bilateral agreements between the UK and 27 members states that could not resolve issues such as cross-border social security contributions for working people or health insurance for British pensioners in the EU, while the3million has stressed ring-fencing is now needed to safeguard EU citizens’ rights in case of a no-deal Brexit.

“Boris Johnson’s election as Tory leader today greatly increases the prospect of a disastrous no-deal Brexit, which will not only do untold economic damage, costing us jobs, trade and growth, but threatens the rights of the more than three million EU-27 citizens in the UK and one-and-a-half million UK citizens in the rest of the European Union.

“Many of those millions have been made to feel unwelcome because the UK government has not guaranteed their rights, creating a hostile environment by treating them like bargaining chips. This is a disgraceful way for the government to have acted - we are talking about people’s livelihoods and that of their families.

“Labour MEPs have tirelessly supported citizens’ rights and will continue to do so as we fight Brexit and the no-deal disaster Boris Johnson and the Tories have threatened to unleash.”