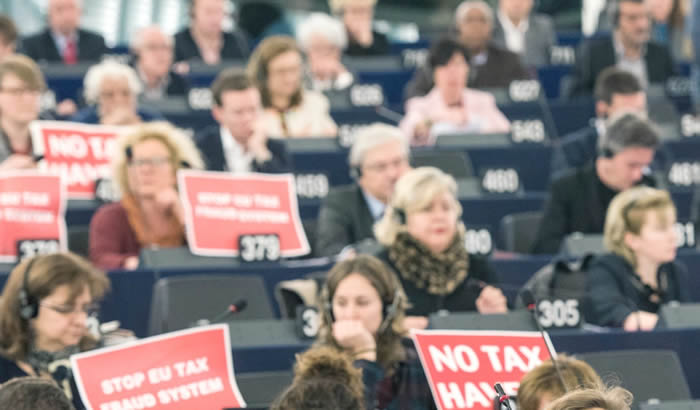 As the clock ticks down towards the new year, we look at some of the major Brexit battlegrounds of 2018... Part two: The fight against tax avoidance:

Labour MEPs in the new year will continue to work with colleagues in the European Parliament to lead the fight against tax avoidance, and will press the government to ensure Britain does not become a deregulated, low-tax outpost after Brexit.

Trillions upon trillions continue to be siphoned off through loopholes to avoid tax, while at the same time public services are starved of money – there is an estimated $7 trillion (£5.3trn) held in tax havens worldwide. This ongoing and urgent problem can only be solved by global action, and it is Europe that is at the forefront of the fight, with the European Parliament leading EU efforts to come up with solutions.

This month, MEPs backed a series of recommendations to tackle money laundering, tax avoidance and tax evasion. These include: an end to the unanimity rule on tax decisions, denying countries that are soft on tax dodging the power to veto legislation; much greater transparency; an EU scrutiny mechanism on newly introduced harmful tax measures; and a ban on letterbox companies, whereby a company is domiciled in a low-tax regime while conducting its business elsewhere.

On tax havens in particular, the European Parliament proposed a global definition of a tax haven, with sanctions against them, while EU finance ministers recently backed a blacklist of tax havens. Yet in the European Parliament, Tory MEPs failed to back the new measures, and in Council, when EU finance ministers have met to agree new laws to fight tax avoidance, Tory ministers have repeatedly tried to block and water-down legislation that would clamp down on tax dodging.

And last week, the EU launched an investigation into the tax affairs of Ikea after claims it made a ‘sweetheart’ deal with the Dutch government to enable it to avoid around €1 billion (£880 million) in taxes. The European Commission says Ikea used a Dutch subsidiary to heavily reduce its tax bill on revenue from stores around the world.

This is just the latest example of the EU taking action against big companies who have used loopholes to avoid paying tax, including Amazon, Apple, Google, Starbucks and McDonald’s. Even if Tories don’t, Labour MEPs believe it is unfair for big companies to benefit from preferential deals while local businesses have to pay the full rate of tax.

In recent months the EU has also launched a crackdown on cross-border VAT fraud. Fraud involving VAT on goods exported to other EU countries costs an estimated €50 billion (£45bn) a year, while the 'VAT gap' between expected revenue and revenue actually collected is estimated at €170bn (£150bn) a year. Cross-border VAT fraud is a big issue in Britain, and Labour MEPs have urged the UK government to ensure it backs these plans and continues to cooperate with the EU in the fight against tax fraud after Brexit.

Labour MEPs have also warned that Britain must match the recent proposals for greater tax transparency in Europe, including widening the scope of public country-by-country reporting. Making companies publicly declare where they make their profits, how much they earn, and where they pay their tax will ensure companies pay their fair share of tax in the correct jurisdiction. By sharing tax information across EU countries, it becomes harder for companies to shift profits to low- or no-tax jurisdictions or to avoid paying tax altogether.

EU action to tackle corporate tax avoidance and evasion could benefit the UK economy by billions of pounds every year, but the Tories have consistently sought to thwart such measures, and there is a danger that many on the Tory benches in parliament will feel even more emboldened to turn a blind eye to tax avoidance after Brexit.

That is why Labour MEPs will continue to back strong EU action against money laundering, tax avoidance and tax evasion, in 2018 and beyond, and push for the UK to maintain existing measures and implement any new legislation.